Blog: The trip of a lifetime flying into the eye of a category 5 hurricane

Meteorologists rely on data collected by the Hurricane Hunters. To travel with them into the eye of a storm was a dream come true for our Lauren Rautenkranz. 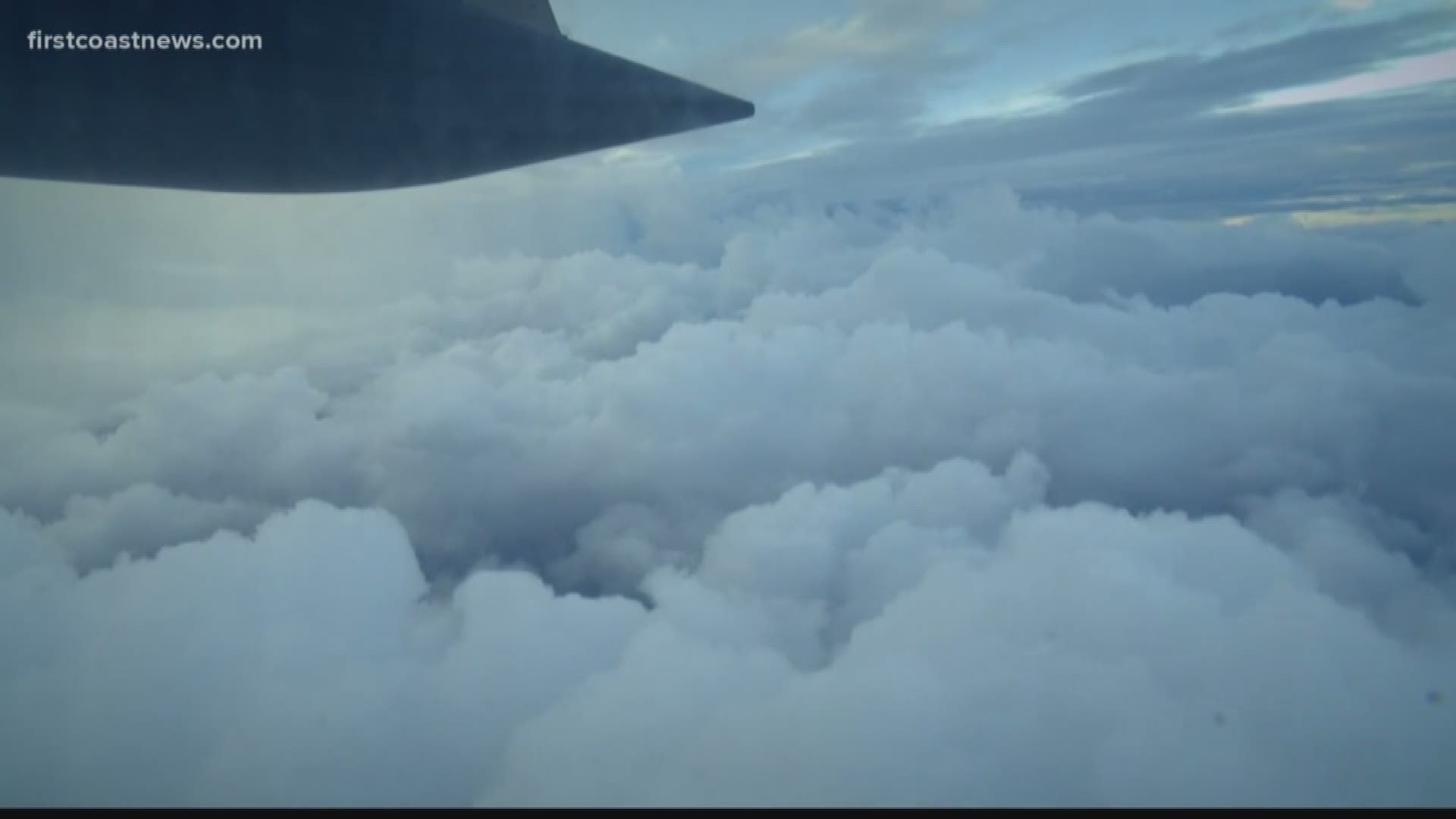 JACKSONVILLE, Fla. — I was on my way home from dinner with my husband celebrating our anniversary when I got the call.

"We can get you on the Saturday media flight," the Public Affairs Specialist said.

That was all I needed to hear before I was texting my news director at 9 p.m. and checking in at the station to find a photographer to go with me on a wild adventure.

A wild and tireless journey to fly into major Hurricane Dorian with the one and only 53rd Weather Reconnaissance Squadron.

Also known as the Hurricane Hunters, these guys and gals have been my idols for years. I had been on the "waiting list" for a media flight for more than a year but had the idea on my bucket list for who knows how long.

Our news director, understandably, was a bit hesitant toward the idea at first. Do you blame him? Sending off two of his employees on a seven-hour car trip, to get on a 12+ hour flight, to travel into the eye of a major hurricane, to then get a few hours of sleep before driving back seven hours to Jacksonville, to then report on the storm back at our station for who knows how long.

But, I'm crazy and was begging for us to jump on the opportunity.

I convinced the boss it was a good idea and I coaxed our wonderful photographer, and my friend, Jeff Renfroe to come along for the ride.

We left Jacksonville dark and early on the morning of Saturday, Aug. 31. I talked Jeff's ear off the whole ride there, but we made it to Biloxi, Miss. safe and sound. We had just enough time to drop our things off and check in to freshen up at the hotel.

We arrived at the visitors center at Keesler Air Force Base and loaded our gear into the Public Affairs Specialist's Jeep. She brought us to the 53rd Weather Reconnaissance Squadron's lobby.

As we walk inside the cool air-conditioned room I saw the sign, "Through these doors walk the world-famous Hurricane Hunters."

This was actually happening! We were going to fly with the Hurricane Hunters. Pinch me!

Flying with the Hurricane Hunters

1 / 45
Lauren Rautenkranz
Had to snap a quick selfie before entering the gates of the Keesler Air Force Base!

Before we could get onto the plane, the crew gave us a breakdown of the flight schedule and safety procedures. They gave us a mini history lesson of how they came to be and why their missions are so important. We hadn't even left the building and I was learning so much!

The WC-130J aircraft have an engine with 16,000-horsepower. FYI: A typical car has 120-horsepower, so basically they were saying we were going to be cruising at a solid pace... to say the least!

The mission called for a low-level flight at 10,000 feet where we would pass into the center of the storm four times. In the eye, the plane descends to about 8,500 feet with the drop in sea level pressure. We were told the flight would be about 12 hours: three hours to get there, at least six hours in the storm, three hours to get back.

The Hurricane Hunters complete these missions to collect critical forecasting data, including air temperature, water temperature, wind speed, wind direction, pressure and humidity. They do this by launching devices called dropsondes during flight.

So, who were we flying with?

After the crew loaded up their equipment, it was time for the rest of us to hop on board. Jeff and I squeezed into the van with everyone else and drove over to where the plane was parked.

Lauren Rautenkranz
12 WHO CARE: Meet Debbie Revels. She helped build the from the ground up and is truly one of the most amazing, caring, selfless human beings. It's an honor to share her story! Down Syndrome ... Association of Jacksonville https://fcnews.tv/2kUfCJU First Coast News

I prayed I wouldn't have to use it because 1) that IS embarrassing and 2) I wasn't going to let an upset stomach get in the way of this awesome experience!

Right around 1 p.m. CDT, the engine started roaring and we were off. Dorian, we were coming for you.

The first three hours was filled with excitement, exploring the different areas of the plane and watching over crew members' shoulders. I was particularly interested in chatting with the Weather Officer, who was so kind to take my dozens of questions and listen to this fan-girl. His job was to send off the Vortex Data Messages with summarized information from the dropsondes. These VDM's are sent off to the National Hurricane Center mid-flight to help with forecasts in real time.

Then, I noticed bright yellow, orange, and red bands on radar. We were about the enter Dorian's eye. For the first pass through, the crew asked us to sit down in case of any turbulence. To our surprise, we zoomed right through the rainbands with only a few bumps.

Before we even realized it, we were in the eye. Maybe it was the sleep deprivation or the fact that I've literally had dreams about what the feeling would be like inside of a storm of this magnitude, but this girl has little tears well up in her eyes! Again, we were in the eye!

It went from gray clouds and sheets of rain out the tiny, circular windows to a clear, blue sky and a while wall of cumulonimbus surrounding us on all sides. The clouds even curve up and around at the top, called the "stadium effect." You even could feel the sense of calm. You could even see the ocean down below, which didn't look nearly as calm as the sky above. The Weather Officer told me seas in the eye of Florence (in 2018) topped 50-60 feet. Picture hundreds of tiny pieces of broken glass. That's how he described it.

We were able to move about the plane once again, but I wasn't able to make small talk with Weather Officer or Loadmaster any longer. These guys were working their tails off! I didn't want to get in the way, but I was in awe at how it seemed effortless for them working on this mighty WC-130J in the middle of a major hurricane.

Every time a dropsonde was launched you knew because of the "thump." Same goes for the buoys the Navy researchers were launching from the back of the plane.

I would count every time these instruments were sent out into Dorian. I would watch as the data streamed in and the lines of information would populate on the graphs. I knew these were the pieces of data, Tim, Mike, Steve, and I were always anxiously awaiting in the weather center.

Our first pass across Dorian's eye was eye-opening, no pun intended. The sun was setting and I knew our next passes through the eye would be dark.

Not going to lie, I was a little bummed because I knew we wouldn't be able to see anything. Boy, was I wrong! It ended up being the most exhilarating flight because of the time of day... or night I should say.

I was fortunate enough to see the classic eye with blue sky above and the stadium effect clouds, but the nighttime ride was equally as breathtaking. I sat in the cockpit for the final passes into Dorian's eye because we had gathered plenty of video for our story. On top of that, Jeff and I had been going at this point for 20+ hours.

It was just me, the pilots, and the navigators. The cockpit was pitch black! All you could see were the green lights from the dashboard -- radar, navigation, fuel indicator, etc.

Once we were in the eye again, the darkness turned instantly to what seemed like daylight. Dorian's inner eyewall was producing a tremendous amount of lightning, which is not quite as common as most people would believe.

The flashes of light were almost constant. Dorian was strengthening and the data coming in was proving the category four hurricane we had originally flown into was on the edge of category 5 status. Needless to say, the rides in and out of the eye got a little bumpier toward the end of the mission.

Sure enough, when we landed, Dorian was confirmed a category 5. We had dropped five extra dropsondes on our flight to help NHC confirm this. A single Hurricane Hunter mission typically drops about 15-20 dropsondes.

Another neat thing about being in the eye of a hurricane at night is the crisp, clear night sky surrounding purple-ish clouds and those same flashes of lightning in the distance. Photos don't even do it justice! I saw the most stars I've ever seen twinkling above.

I might be a big ol' sap. But I was so grateful to be there watching all of this unfold.

A lot of people also ask me if I was "worried" or if I "felt unsafe" during the flight. My answer every single time is this: I never once questioned my safety. These folks are true professionals. I even felt comfortable enough I took a brief "nap" on the back half of the flight... a nap on a WC-130J? I know what you're thinking, "Girl, you are crazy!"

My interview with Lt. Col. Sean Cross was probably one of the most memorable moments of our flight. We spoke on camera for about 20 minutes, and then off camera for more than an hour.

You see, I knew I'd enjoy the weather and meteorology side of this trip. But what surprised me more so was how the experience humanized the "Hurricane Hunters" for me. In the interview, I refer to the crew as "unicorns" because we're always mentioning the Hurricane Hunters on TV and everyone always talks about how vital they are for tropical forecasting. But I was actually getting to talk and sit down with them, see them in their natural habitat!

I made that comment out of the utmost respect because these people are putting their lives in danger every single time they show up for work.

These are real people. They have families. They have wives, husbands, children, pets waiting for them back at home. They are idolized in Biloxi, MS. They do school visits. They speak at public events. They are good, hard working folks.

Thank you for your service and for giving me the opportunity to be a Hurricane Hunter for a day. I will never forget this experience!