JACKSONVILLE, Fla. -- August 27 marks the anniversary of one of the more horrendous events in Jacksonville's history.  It was 56 years ago when the brutal attack that became known as "Ax Handle Saturday" occurred. 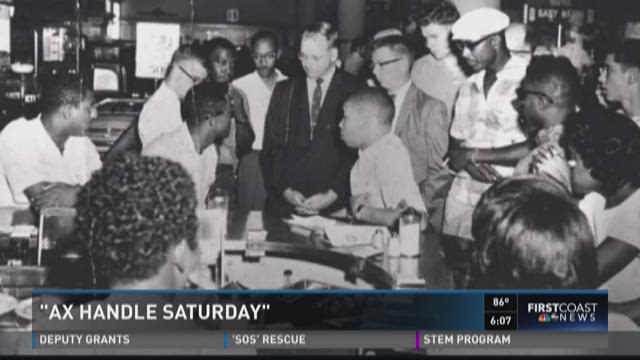 JACKSONVILLE, Fla. -- August 27 marks the anniversary of one of the more horrendous events in Jacksonville's history. It was 56 years ago when the brutal attack that became known as "Ax Handle Saturday" occurred.

That infamous Saturday, The Youth Council of the National Association for the Advancement of Colored People (NAACP) was participating in a peaceful protest, sitting at a whites only lunch counter until they were spit on by attackers.

According to The Florida Historical Society, things escalated and 200 white people chased them through the streets of downtown Jacksonville, beating them with ax handles and baseball bats.

Though the attack was originally aimed at the protestors, it soon began to include any black person in sight, according to the FHS. Authorities stood idly by until members of a black street gang called "The Boomerangs" tried to help those being attacked, at which point some members of the police joined in the beatings.

The victims of the attacks ran to a nearby church, finding sanctuary, until the mob disappeared.

Rodney L. Hurst was the president of the Youth Council the year the attack happened. He has written about his experiences in his award-winning book "It was Never about a Hot Dog and a Coke," where he contextualizes the state of race issues at the time.

“Jacksonville was a mess, not unlike a lot of other southern cities,” Hurst says.

According to FHS, it is believed that the Ku Klux Klan organized the mob attack on "Ax Handle Saturday." Hurst said that the intent of the mob was to scare, intimidate and bring physical harm. “Many times you could not draw a line between the Klan and law enforcement, because law enforcement were at least accomplices to a lot of the things the Klan did.”

To read more about this, visit the Florida Historical Society.

Photo courtesy of Florida Today and The Florida Historical Society