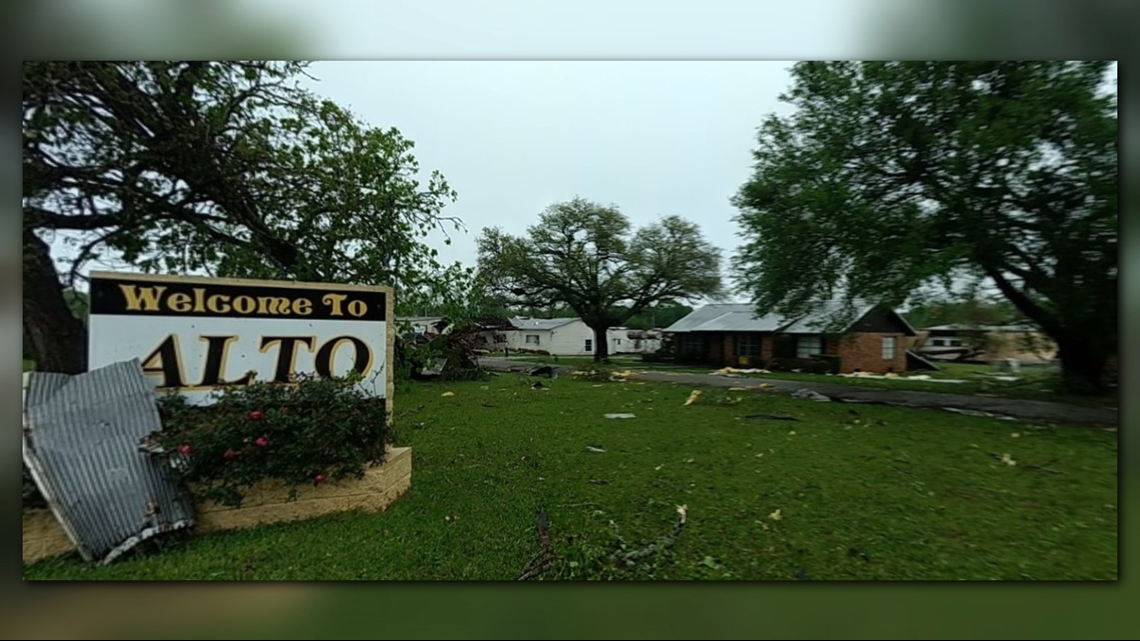 TYLER, Texas — Widespread damage and multiple injuries have been reported after storms hammered down on East Texas overnight and into Saturday afternoon.

According to Alto Police Department Chief of Police Jeremy Jackson, approximately 125 homes were damaged ad between 40-45 homes were destroyed in the storms.

So far, there are four confirmed fatalities, including two children in Angelina County, one in Cherokee County and another person in Houston County.

The storm caused major outages across East Texas with thousands of customers left without power.

CBS19 has compiled a list of areas with confirmed damage reports residents should be aware of:

The Cherokee County Emergency Management team is setting up an agricultural drop near Alto City Hall.

Aaron Low is going to be in charge of the donations.

City is asking for the following supplies for the drop:

"We've been in contact with FEMA. There are some numbers we have to meet to get them down here. Whether we meet those numbers that's yet to be determined," Alto Police Chief Jeremy Jackson said. "We're starting to get a bunch of the debris and trees that's in the city street and debris in ditches cleaned up."

On Sunday, Alto Police Chief Jeremy Jackson says power has been restored to many of the customers left without power Saturday night.

Power was restored to City Hall, where Chief Jackson says the city will control all further recovery operations.

At this point, Jackson says they are working to salvage anything part of the damage possible, including homes and vehicles.

Chief Jackson says there were at least 25 injuries at Caddo Mounds, where a group was celebrating Caddo Culture Day.

According to Chief Jackson, several units responded to people who were trapped inside their houses. Jackson says all of those trapped have been rescued.

Much of the damage occurred in the northwestern part of town. EMS has set up a triage unit at The River Church located on Marcus Street. The American Red Cross has also deployed to the church to assists victims of the storms. They ave also set up temporary housing for residents who have been displaced.

Authorities from Cherokee County, Smith County, Houston County and Nacogdoches County ventured to Alto to assist with the rescue efforts.

The Smith County Department of Emergency Management deployed a strike team to Alto to assist in search and rescue efforts.

The Hudson Fire Department was also deployed to Alto to assist in search and rescue efforts.

At this time Highway 69 heading into Alto is closed.

Alto ISD announced via Facebook all classes are canceled until the buildings are deemed safe for students and staff. The district will be closed for the remainder of the week. Classes will resume Monday, April 22. District staff will report on Thursday at 8:30 a.m. in the Elementary Rotunda.

According to Alto ISD, there was no significant damage to any of the buildings. However, the district will continue inspections to the high school. As a result, the high school will hold classes at the other campuses indefinitely. The district is working on a schedule to best help students finish out the remainder of their school year.

Texas DPS and the Texas Division of Emergency Management are working with local authorities throughout East Texas, particularly in Cherokee County, to assist in the recovery effort.

DPS warns drivers not to travel through damaged areas and not to approach any downed lines.

Below are photos of just some of the damage in Cherokee County:

A five-year-old girl is unhurt after a tree fell through the roof of her home.

According to the Upshur Rural Electric Cooperative Corporation, a 5-year-old girl was sleeping in the back room of the home when a tree crashed through the roof.

The girl woke up and crawled to her older sister and boyfriend in another room.

The Houston County Sheriff's Office confirmed one fatality in the country as a result of the storms.

According to TxDOT, State Highway 21 East and FM 227 have major damage along the road. While the debris has been moved from the roadway, there is still debris on the side of the road.

TxDOT says there will be large equipment working on the roads.

TxDOT urges drivers to use caution and avoid these area if possible. Drivers are also urged not exit their vehicles to take pictures.

“We have great support from law enforcement through the areas where tornadoes devastated parts of Houston County," Rhonda Oaks from TxDOT said. “We encourage motorists to take alternate routes during this clean-up and avoid FM 227 and SH 21 East, if possible."

The Houston County Sheriff's Office says there were multiple structures, including homes, barns and outbuildings, as well as vehicles damaged from the storms in the following areas:

The sheriff's offices also says they are in touch with area power companies to restore power as soon as possible.

CBS19 has also been made aware of storm damage in Nacogdoches County.

Officials are encouraging motorists to avoid these areas and use alternate routes as emergency crews respond.

The Angelina County Sheriff's Office confirmed the children were ages 8 and 3.

Lufkin High School will not have classes Monday due to storm damage to the campus.

The Lufkin Police Department is warning rivers of traffic light malfunctions across the city.

Traffic lights are out or have been damaged at:

Trees have been reported down at:

Kilgore police have reported the following road closures due to high water or downed trees:

To submit a damage report, please send an email to news@cbs19.tv.