When Randy Fridkis moved into the new Meadow Walk neighborhood, he was sold a "lake front" property. However, just mother later, his view looks a lot different now. 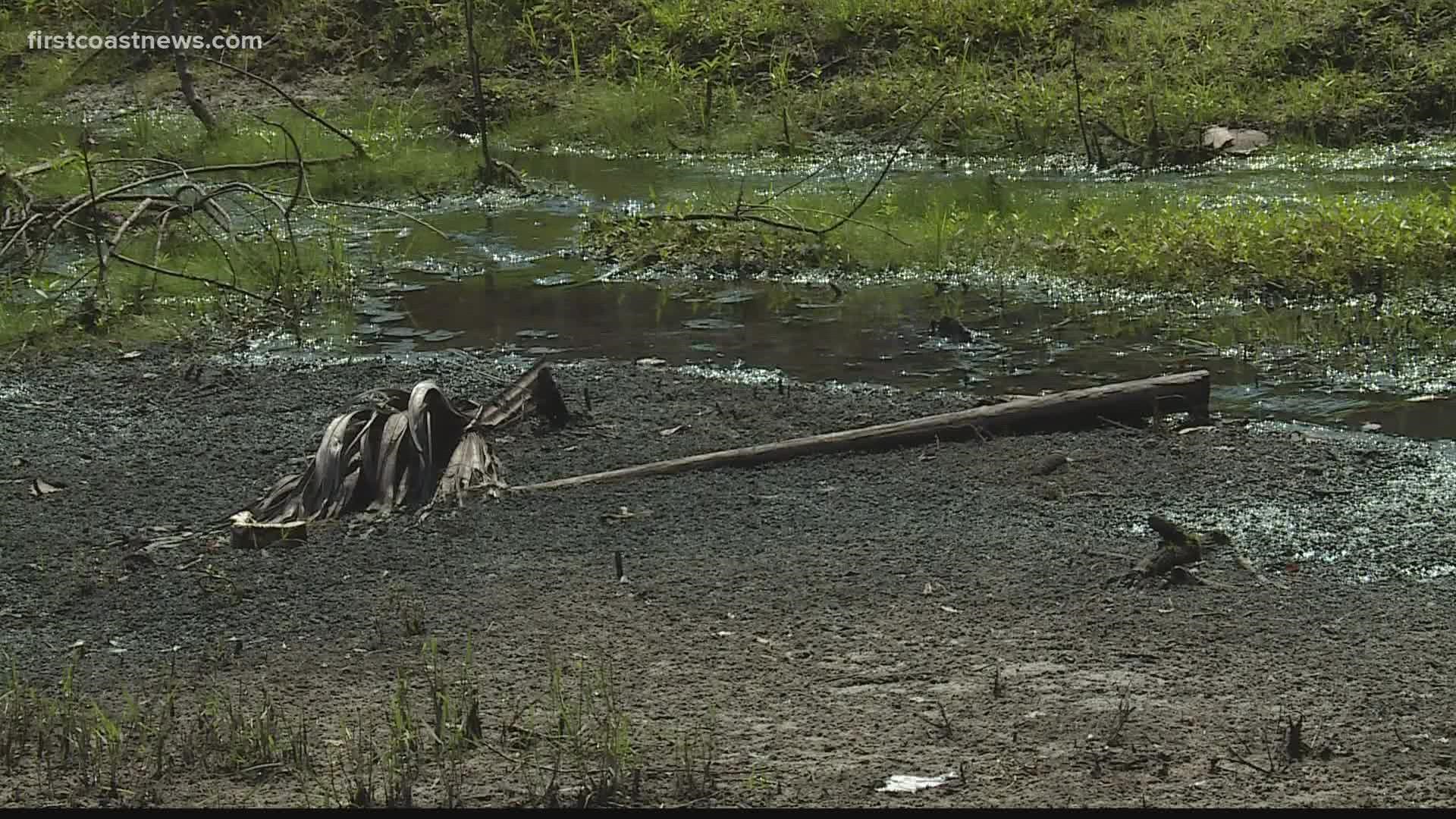 JACKSONVILLE, Fla — They were sold a "lakefront property" but just months after some people moved into a Baymeadows neighborhood, that scenic lake has turned to muck.

The On Your Side team found out why the lake was drained and how the developer is responding.

Two-year-old Joshua misses feeding the birds that lived at the lake next to his grandfather’s backyard.

Now, the Meadow Walk homeowner and HOA president says there are far fewer birds and fish – and a lot more mud.

The first picture below is from May, soon after he moved in. Beginning in mid-June, Fridkis says, it started looking like the second picture below.

The company that has maintained the lake for 25 years noted the change in a recent inspection report.

The company, Bluewater, submitted a report that said levels dropped two feet because of a new, and much lower weir or outfall structure, which is the lake's drainage system.

It also warned of the following possible complications:

The company advised, “erosion control measures will eventually be necessary should water levels remain extremely low. Shoreline stabilization for property preservation and public safety should be tabled for discussion.”

The report also noted Bluewater visited the lake Jul. 23 and tried to apply algaecide. However, “algal bloom was excessive across the lake but due to the shallow, warm water we could not apply algaecide that could trigger low oxygen and a subsequent fish kill.”

“For them to leave it that way, to me, is tremendously irresponsible," Fridkis explained.

The On Your Side Team reached out to the developer D.R. Horton who installed the new drainage system.

In a statement, the company noted the plans were approved by the City of Jacksonville and the St. Johns Water Management District.

D.R. Horton noted the levels are a result of district permit requirements. It added that, if district officials approved it, “we would be happy to work with our homeowners to adjust their sod lines, if necessary.”

Fridkis says his neighborhood feels mislead and only wants the quality of life they once had back.

“Bring it back to its original levels, and any damage that was done as a result… fix it," He said. "That’s all we’ve ever wanted, was just what we had and basically sold to us.“

The following is the full statement D.R. Horton sent to the On Your Side team:

"To our knowledge, the Baymeadows project and the original outfall structure for the lake were initially developed in the late 1960s or early 1970s prior to the establishment of the St. Johns River Water Management District (the District) and prior to D.R. Horton’s involvement in the property. We are not aware of any permits relating to the original outfall structure; however, the new outfall structure was designed by a professional engineer and the design plans were reviewed and approved by the City of Jacksonville and the District. The outfall structure was subsequently constructed in accordance with the approved design plans and the District’s issued permit, and the outfall and corresponding water levels are a direct result of what the District requires per their permits. If a new lake level is established by the District’s engineers, we would be happy to work with our homeowners to adjust their sod lines, if necessary."

They were sold a “lake front” property, but – just months after some people moved into the Baymeadows neighborhood – that scenic lake has turned to muck.

The @FCN2go On Your Side team found out why the lake was drained and how the developer is responding. pic.twitter.com/1Whyz4oucw