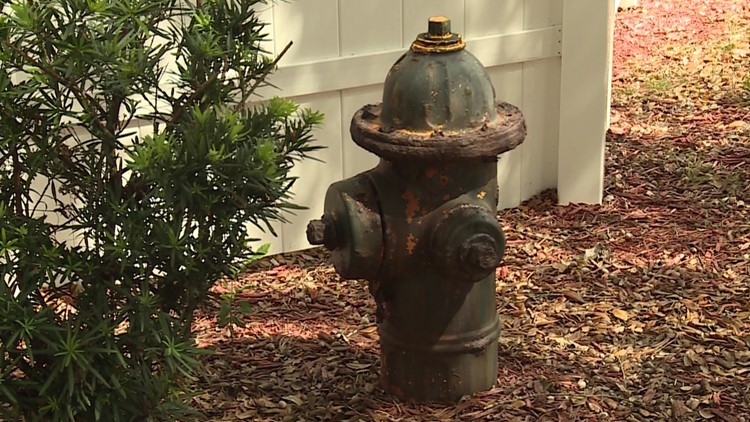 JACKSONVILLE, Fla — In the Town of Welaka, which has a population of less than 800, sits an apartment complex that is home to 30 seniors.

Mary Ipock has lived in Sugar Mill Woods for 14 years.

"I like it here but I have had some high water bills," she said.

Pam Olson does not live in the complex but she is raising questions about the water bills and about the level of fire protection.

"We live in a forest," Olson said." if we were to have something like California I would want all of our fire hydrants working."

The only fire hydrant in the complex is not working. It is painted black and covered in rust.

"There's not a fire hydrant that I have seen that is close to here," Olson said.

According to the Town Ordinance, the town is responsible for the maintenance of fire hydrants.

The On Your Side team reached out to Mayor Gordon Sands. He knows about the hydrant at the apartment complex.

"It is not ours," Sands said. "That is on private property. It is their responsibility, that is a major concern"

The mayor said the fire hydrants belonging to the Town of Welaka were recently inspected and have all been painted an orange color on top to show they are working properly.

The On Your Side team contacted the property management company of the complex and the CEO was surprised.

He said it is not unusual for a property to abandon a fire hydrant if there is ample fire protection from the community. Flynn said the safety of residents like Mary Ipock is his priority.

He spoke with the Satsuma Fire Chief which is nearby and was reassured him there's ample fire protection, but he said he will investigate further because he wants to sure.

Flynn said his company is prepared to make changes if necessary.