According to city records, yard waste has accounted for 62% of the formal complaints of missed collections over the past six months. 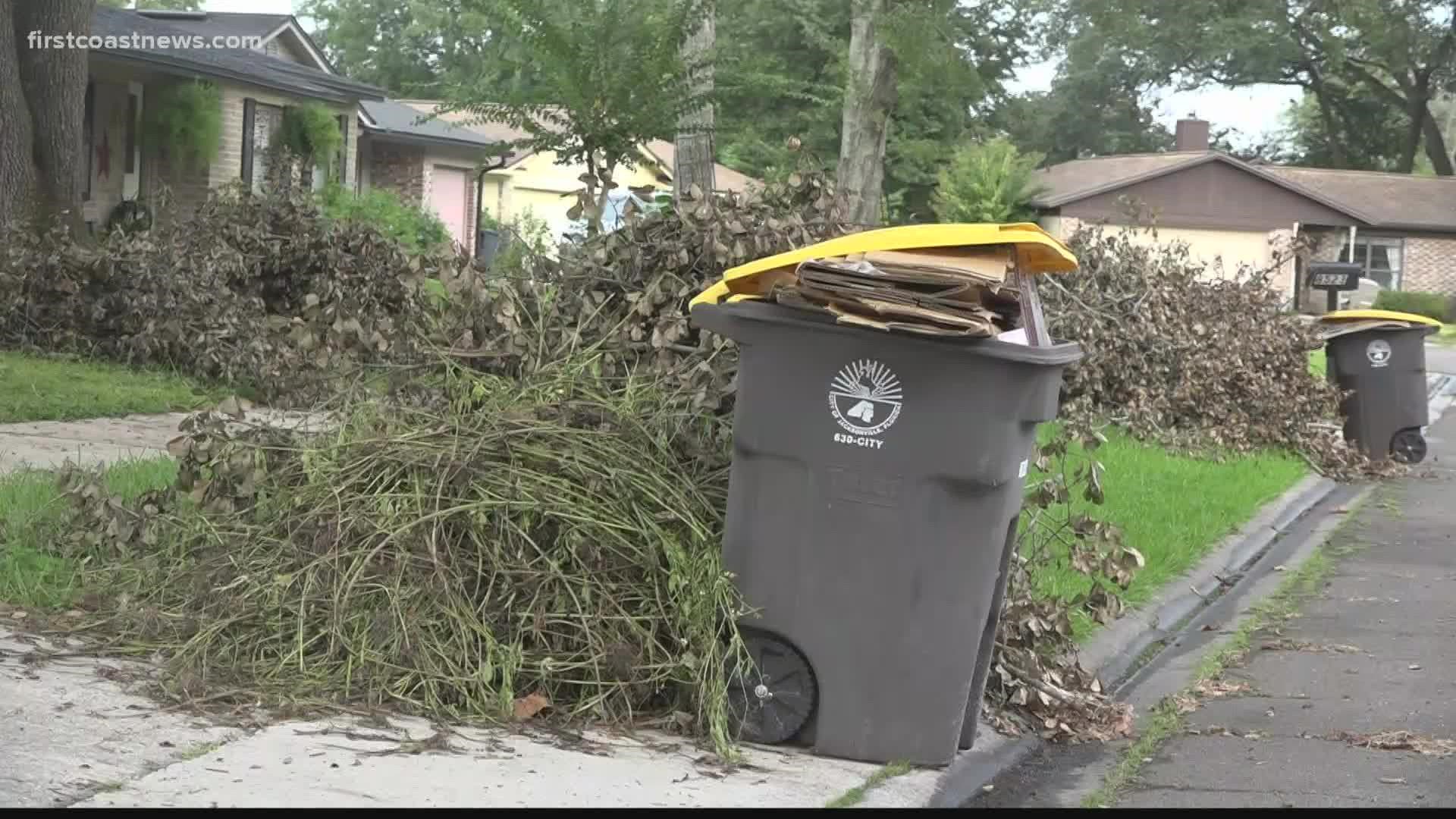 JACKSONVILLE, Fla. — The frustration over the missed collections of recyclables and yard waste is piling up around Duval County.

It’s a problem people are seeing all over the city. In August alone, there were 17,904 formal complaints made to the City of Jacksonville for delays in garbage, recycling, bulk and yard waste combined, which is up more than double from July, when there were 8,162 formal complaints.

The On Your Side team investigated why collections are so backed up. We're breaking down a two-part solution that one city councilmember is proposing.

“My yard man comes every other week. And sometimes it's not picked up for a whole month.“ Westside homeowner Teresa Williamson said. "My tax dollars is paying for this. So, why aren't we getting the service?"

The On Your Side team noticed that rotted branches and trash bags are lining the streets in East Jacksonville just as they are on Williamson's street on the Westside.

In fact, here’s a map showing 2,000 addresses that made a formal complaint with the city about a missed collection just in the month of Aug.

This is just a glimpse though. For garbage, recycling, bulk and yard waste combined there was closer to 18,000 complaints made last month pic.twitter.com/YNbU46F3kZ

The city’s Solid Waste Division services the Urban Core, but hires three private solid waste companies to service the rest of the county. It says the collection delays are due to the contractors struggling to find and keep employees.

The city fined all three solid waste companies in July for delays. Here’s how it breaks down:

However, District 2 City Councilmember Al Ferraro believes a labor shortage is only where the problems begin.

There used to be four city landfills in Jacksonville. The ones on Island Drive, Girvin Road and Sunbeam Drive all closed after reaching capacity.

Now, as Jacksonville is growing, there’s only the Trail Ridge landfill on the Westside. This causes those collecting at the Beaches, for example, to have to drive almost 100 miles round trip to dump one load.

Ferraro believes the city needs to go back to what it knows works and open more landfills in industrial areas to speed up collection services.

“So, a truck could go into a neighborhood, it could get filled up, it could empty itself. And it could go back out six and seven times compared to what we're doing now, and not spend all this time on the road or in line at the dump sites," he explained. “You may have people say, 'Well, I don't want any of these these places in my back yard.' Well, you've got the stuff sitting in the front yard for seven, eight weeks. We need to do this.”

However, more landfills are only part of his solution.

Ferraro has his own lawn service business. So, naturally, yard waste has been a big focus of his, which has accounted for 62% of the formal complaints of missed collections over the past six months, according to city records.

While people want to get rid of their yard waste, Ferraro says there’s a local company who wants to recycle it.

“The key is to take what used to be a liability and turn it into an asset for beneficial use," said Bill Gaston, owner of Gaston’s Tree Debris Recycling. “Everybody wins.”

So, how does it work?

Haulers pick up the yard waste, and bring it to one of their sites. Gaston’s company then grinds down the waste until it's much smaller and creates different reusable materials, such as mulch that can be sold in stores.

It’s a service that Gaston’s Tree Debris Recycling is doing at 15 sites across Florida, including two in Jacksonville.

The company stays busy during hurricane season, but also does consistent contract work for Hillsborough County.

“We transfer it to one of their landfills and they use it for cover. They also have a composting project on that landfill as well," Gaston explained.

Ferraro is proposing that the City of Jacksonville take advantage of the same service, and partner with Gaston’s to speed up the collection of yard waste, which right now takes up more room in a hauler’s truck than any other kind of waste.

“We could chop up the debris and make it a safer, smaller, lighter load and make a larger drop-off," Ferraro said.

Ferraro spoke with the mayor’s office Monday in special committee about his solution. He hopes to get the administration’s backing so his proposal can move forward sooner than later.

Beginning Oct. 1, Meridian Services will take over Republic Services' collection routes in parts of North and Northwest Jacksonville, according to the city. The move has been discussed for a few months, but the contract with Republic does not expire until the first.

If you are having a problem with waste collection in Duval County, here’s how to report it: MyJax app, Myjax.custhelp.com or call 630-CITY (2489).

Catch @FCN2go tonight at 11 to see me on a tractor.