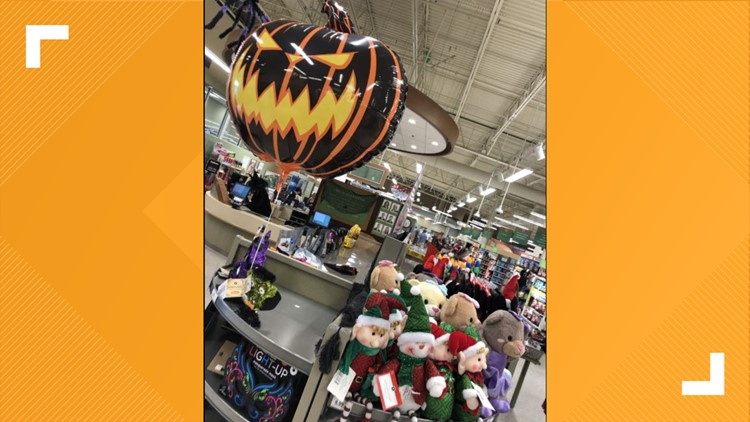 Think Christmas comes too early? It's our fault

JACKSONVILLE, Fla. — I was picking up some last-minute candy at my neighborhood Publix Thursday night when I stumbled upon a display featuring a ghoulish, helium-filled balloon tied to a shelf of Christmas elves. Feeling as though I had reached some kind of Back to the Future-Esque space-time continuum, I took a picture.

For some reason, seeing Christmas at Halloween while shopping at Wal-Mart or Target or even Lowe's and Home Depot, doesn't phase me. But seeing it up before I can even pre-order my Thanksgiving turkey at my grocery store shook me a bit. I've been around long enough to see the pendulum swing. I comforted myself by saying, "That's probably as early as it'll happen because no one can be buying this stuff yet."

Then I came across this statistic from the National Retail Federation. Forty percent of consumers start their holiday shopping before Halloween. That's four of every 10 people. Think of your 10 closest friends. You know who those four are. A senior director for the federation says they're starting early because they want to spread out their spending, a trend she says, has been consistent for the last 15 years. Bottom line, while 15 percent of the year comes between now and Christmas, as long as that many people are shopping this early, stores are going to keep pushing Christmas gifts.

Not only are people starting their holiday shopping earlier, but they're also spending more. On average, people will spend nearly $1,050 this holiday season. Of that, $659 will be spent on gifts for family, friends or co-workers. Another $227 will go toward decorations (Clark Griswold scoffs) and $162 will be spent on non-gift purchases, like Christmas cards and wrapping paper.

Do you think Christmas comes too early? Perhaps, it's our fault.