The letter which is typewritten and postmarked from New Orleans, did not have a signature or return address. 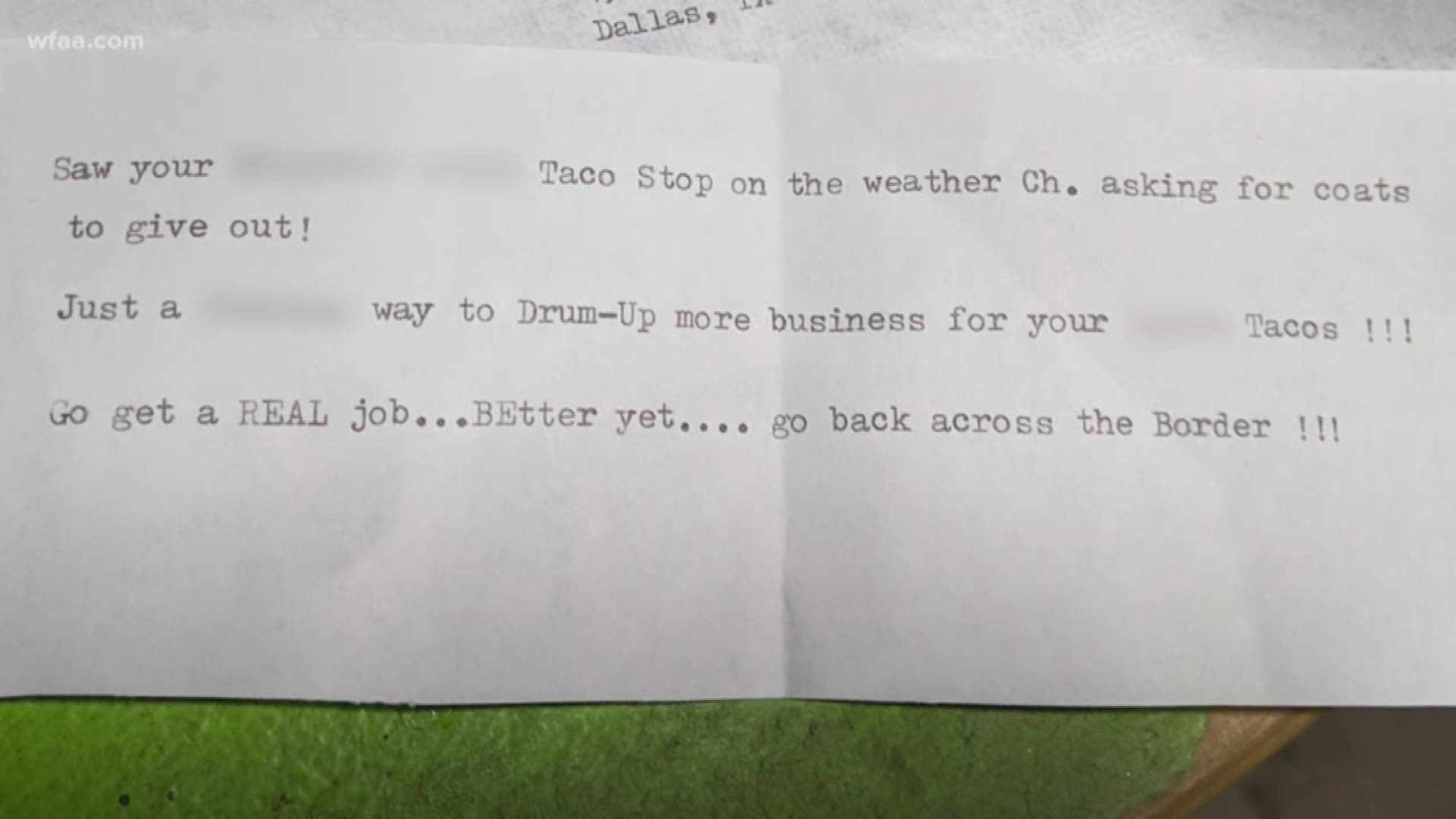 DALLAS, Texas — A letter filled with racial slurs was recently sent to a Dallas taco shop owner, attacking her for the kindness that she's shown the last five years during the winter.

Since 2015, Emilia Flores has put set up clothing racks outside of her restaurant the Taco Stop.

The goal is to collect donated coats to the racks so those who need one can come by the restaurant and take something that will keep them warm without shame or judgment.

Flores, who was a psychologist before becoming a full-time restaurant owner, got the idea when she was visiting family in Mexico.

She says there were steel spikes under a bridge in Mexico City for people to hang donated coats for the needy.

"The beauty of having the rack, well none of us really like to ask for help," Flores said. "It takes the shame completely away of needing anything."

On Tuesday, a local group donated around 100 coats that filled the racks outside of the Taco Stop.

A day later, the racks were empty. The lonely hangers remind Flores that she's making an impact.

They are badges of kindness.

"It makes my heart warm," Flores said. "We're all the same, and we all need help at some point. If we are not kind to each other then who is going to make a difference anywhere?"

Flores' idea is brutally compassionate, one that WFAA has highlighted and something that was recently featured on the Weather Channel in December.

But sadly, someone who saw that segment in Louisiana wasn't so happy to hear about what Flores was doing.

An edited transcript of the letter reads:

"Saw your BULLS**T SP**K Taco Stop on the weather Ch. asking for coats to give out!

Just a F**king way to Drum-Up more business for your Sp**k Tacos!!!

Flores, who was born in Mexico but is now a citizen, was visiting her family in the country when the shop received the letter.

An employee read it to her over the phone when it arrived.

"My first thought was how sad that somebody can take the time to typewrite something, put a stamp on something the day after Christmas, and send it to complain about kindness," Flores said.

To "complain" is putting it mildly. What Flores received, and many would likely agree, was a message of hate for someone who gives back.

"What I do is not about me or about the Taco Stop, it's about doing something for somebody else...and I just don't get this," Flores said.

To be honest, no one should.

"Time can be better spent on helping other people...or yourself for that matter."

But the language on a piece of paper won't stop Flores' ministry.

"I don't have hate in my heart. I just think it's very sad. What would drive someone to write a hate note for something that people are getting help from?"

If you need a coat or would like to donate one, the Taco Stop is at the 1900 block of Irving Boulevard.