'That was a very devastating time': Wife of missing Jacksonville firefighter opens up about husband, search to find him 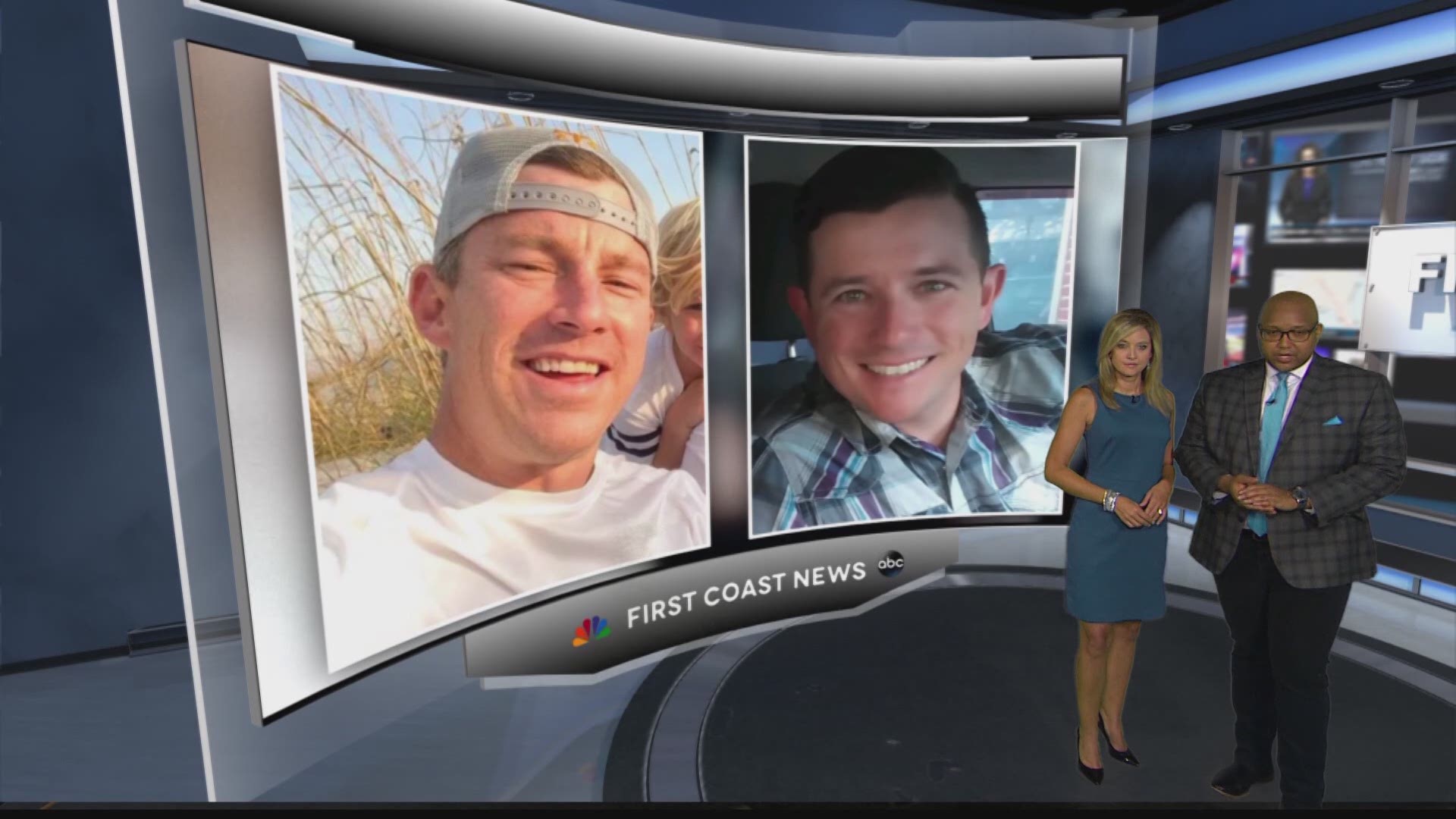 JACKSONVILLE, Fla. — This week marks one month since Brian McCluney and Justin Walker, two off-duty firefighters, went fishing in Port Canaveral and vanished. Despite a massive search led by the U.S. Coast Guard, a small tackle bag found floating off the coast of St. Augustine, Fla., was the only sign of them that's ever been found.

Now Brian McCluney's wife is opening up about her husband lost at sea.

They were high school sweethearts.

“We ended up going to prom together and my mom said, 'Oh now it’s over. I can tell by the way he looks at you,’” said Stephanie McCluney. “He was loyal to a fault and probably the most kind-hearted, soft-spirited, a gentle man, yet so manly and masculine at the same time.”

“If you could see the pictures of him with his babies, so loving and just a big, strong man with such a loving, tender touch and spirit with them. They were his world,” Stephanie McCluney said. 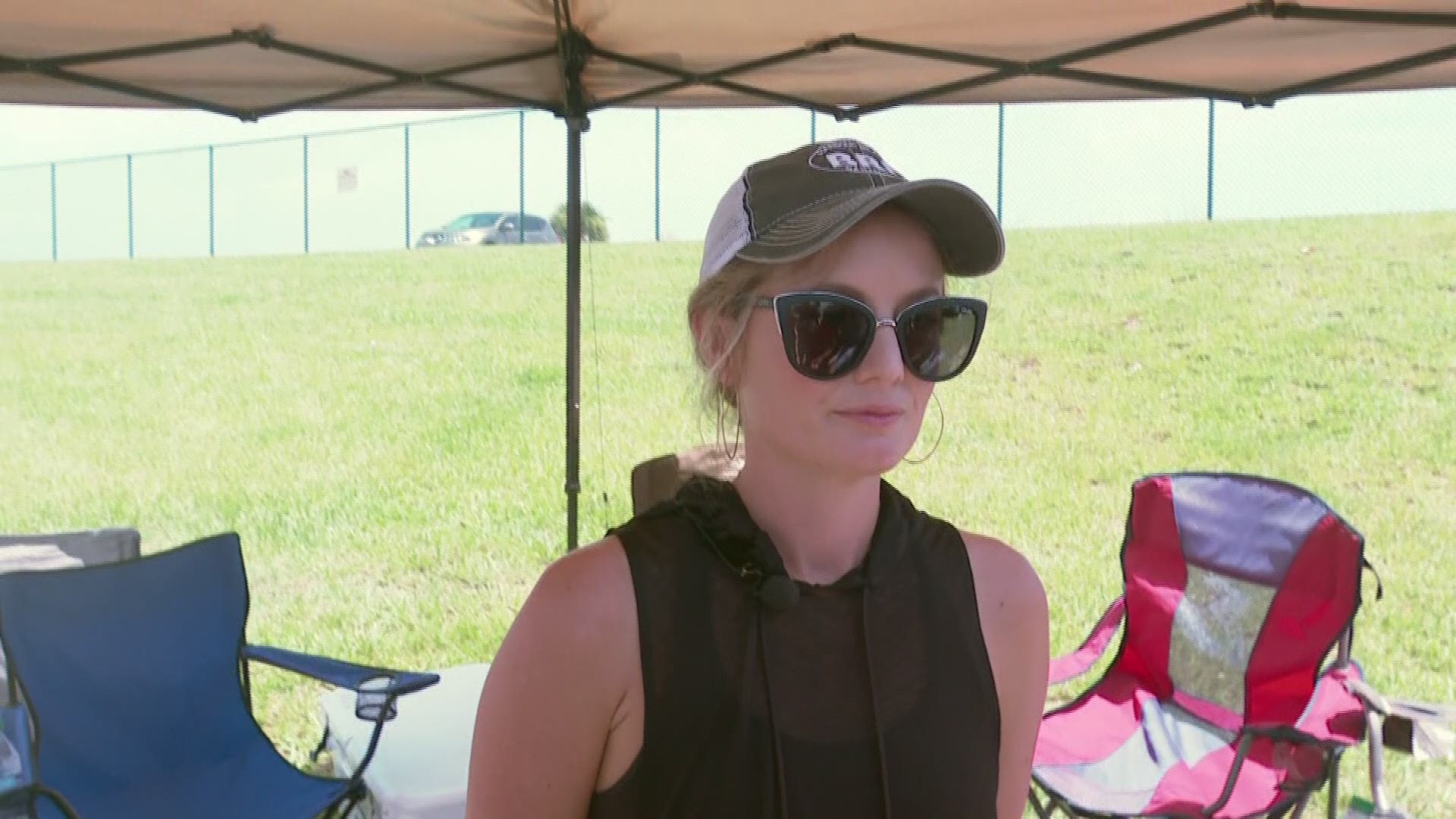 Brian McCluney loved to serve, first in the U.S. Navy and then with the Jacksonville Fire and Rescue Department.

“He was a Purple Heart recipient in the attack in Fallujah,” Stephanie McCluney said. “He never shared the exact story with me because he wouldn't give himself that much credit. He wouldn't want the spotlight, just 'I was there and there was an IED.'”

After he returned from Iraq, he decided to become a firefighter.

“He needed the brotherhood, the service, that camaraderie that he had in the military,” she said.

She introduced her husband to her friend Justin Walker years earlier and when Brian McCluney decided to go to fire school; he asked Walker to join him.

“Justin said, 'I think you're right. Yes, I'm going to do it,' and registered that night. He, too, loved to serve. Absolutely kindhearted, gentle. They were so similar in so many ways. a heart for people,” Stephanie McCluney said.

Walker ended up joining the fire department in Fairfax, Va. Brian McCluney joined the one in Jacksonville, but they stayed close.

On Friday, Aug. 16, 2019, they were headed out of Port Canaveral where Brian McCluney grew up. They were going fishing in a 24-foot boat that belonged to his father. 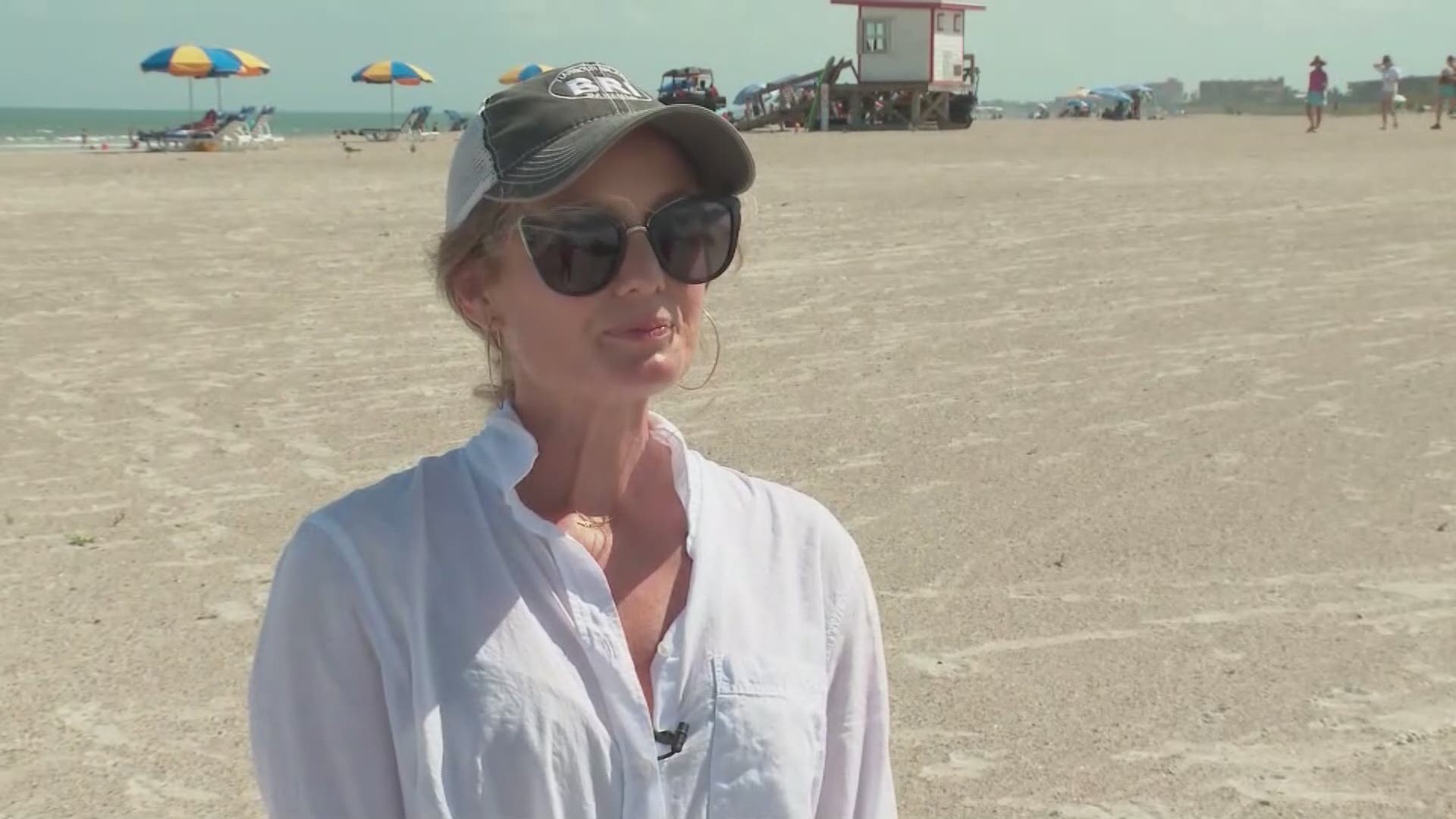 “His father passed away about six weeks before, very unexpected, just a surprise that rocked entire family," Stephanie McCluney said. "It was time to sell his dad's boat and he wanted to make sure it ran, and he wouldn't sell it without knowing that it was in complete working order. He said 'mom, I have to make sure it runs and take it out and give it the sea trial and then we can sell it from there.'”

Stephanie McCluney said she really didn't think anything about it.

“It was a trip he and Justin had done so many times,” she said. “He was going to drive back to Jacksonville that night.”

But, by 5 p.m., she could see her texts to her husband hadn't been read.

"It was quite quickly that we decided it's time to call the Coast Guard,” she said.

The Coast Guard, JFRD and more than a dozen other agencies, along with hundreds of volunteers in their own boats and planes, started searching. Two days later, a glimmer of hope: a small tackle bag found floating about 50 miles off the coast of St. Augustine.

Stephanie McCluney says she is 100 percent positive it was her husband’s.

Credit: Facebook
The wife of a missing JFRD firefighter says her husband, Brian McCluney's tackle bag was found off the coast of St. Augustine on Monday.

“It was just a little ray of sunshine, like a little wink from God. I felt like they are out there still," she said. “It was strategically packed, all the heavy things he had taken out and zipped it right back up and dropped it in the water, just saying come get us. We are here. It gave me this great hope.”

After searching from Central Florida to New England, an area roughly the size of Montana, the Coast Guard made the grueling decision to call off the search after six days.

“That was a very devastating time, but I have no doubt everything humanely possible was done, not a doubt in my mind,” Stephanie McCluney said.

When asked if she thought the boat had some type of mechanical problem, she said, “That was my initial kind of gut saying there was something that didn't go well mechanically. I don't really know. That was my gut.”

As for whether or not her husband and his friend could still be alive, she says she will never give up hope.

“I really don't know how to answer that. I have this hope of course, but then I have to face this pragmatic reality of life as well," she said. "I know if God so willed it or deemed it, He could pull them up from where they are. They might be stranded on a beach, and I'll always have that hope. I will, but then again, there are the realities that I do need to bring my kids into some form of routine and what this looks like now.”

It’s the questions from her two young children that have been the hardest part, but she says they are resilient.

“Connor, the younger one, is 6 and says, ‘Daddy's not here. He's in heaven’, and Brin will say, ‘Well he could still come back next week, couldn't he?’ That's hard,” Stephanie McCluney said. “When they say prayers at night, they say 'God, give a kiss to daddy. Give him a hug. Tell him we miss him.' They are fine with that. They know maybe he's up there and he's in good hands.” 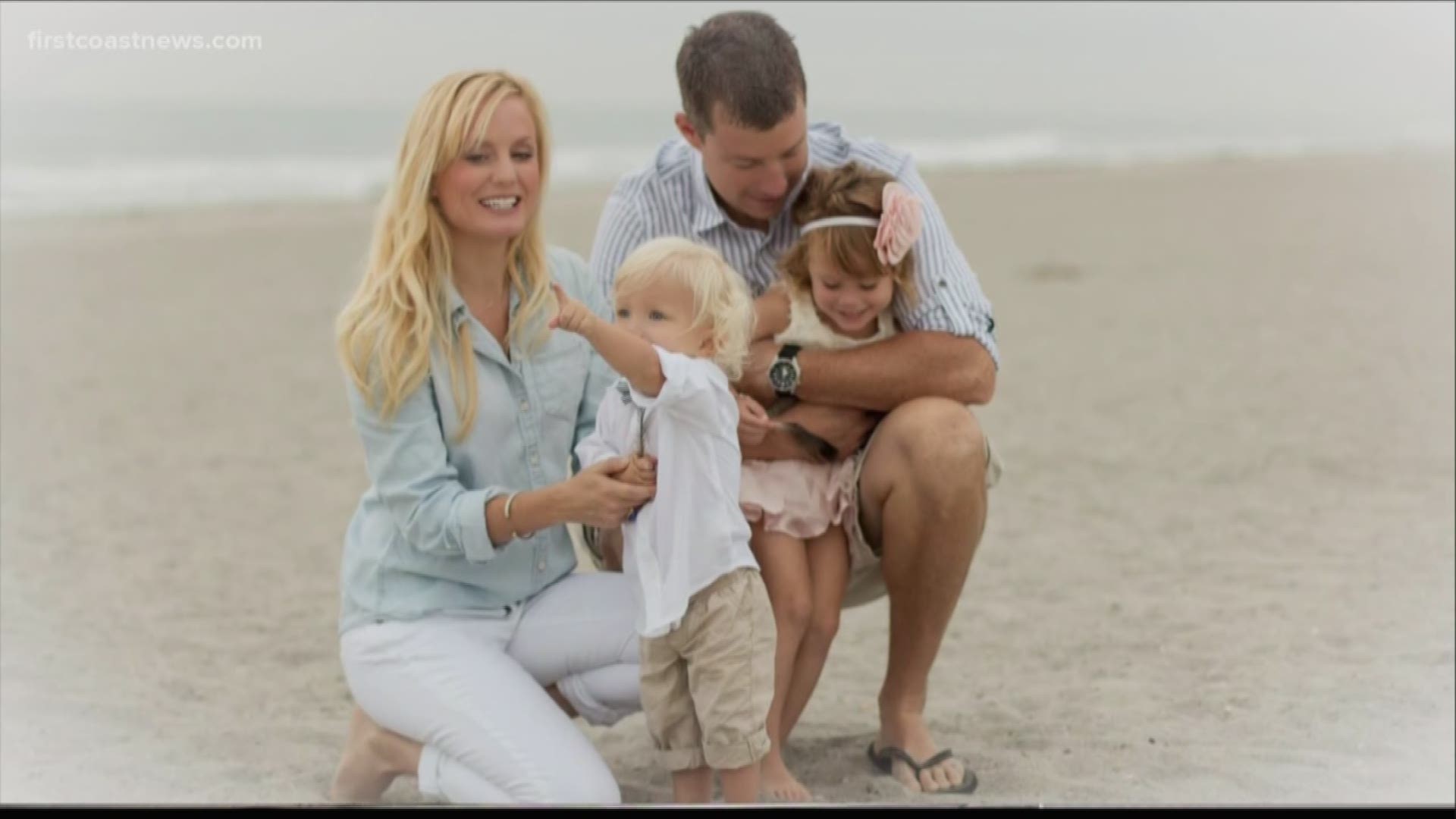 As she relies on God to sustain her, Stephanie McCluney’s faith is unwavering. She trusts everything will happen in God’s timing.

She finds comfort in the memorial left at her husband's truck near the boat ramp where he was last seen.

“When I saw pictures, I saw two crosses, Justin and Brian," she said. "When I got back to my parent's house it was actually three crosses that were there, and I have no doubt that was the two of them and Christ. The body of Christ our Savior, for me that's what it represented. Three souls there on the boat.”

Credit: Stephanie McCluney
These crosses were left by Brian McCluney's truck near the boat ramp where he was last seen.

Humbled by the outpouring of support, grateful for all of the prayers and all of the volunteer search efforts, Stephanie McCluney said the love shown to her during this trying time has been overwhelming.

“I could never begin to say thank you to everyone,” she said. “It restored a lot of faith, unity of people. There was no race, color, creed, gender, political stance. People just came together.”

While she said her husband would not want all the attention, she finds it fitting that he brought so many people together.

“If you ever doubt humanity don't,” she said.