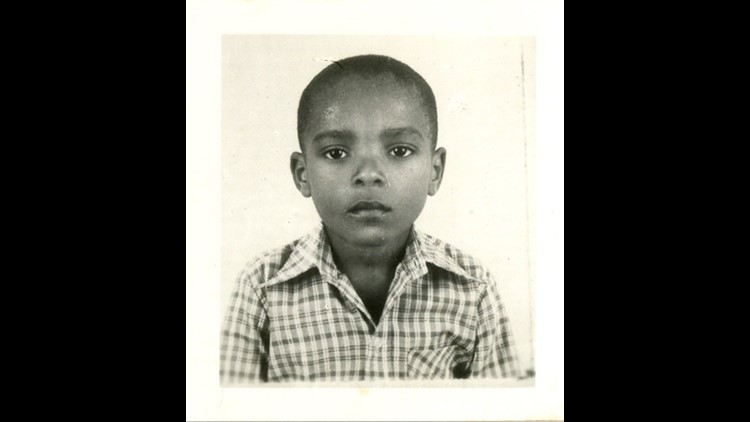 JACKSONVILLE, Fla. -- The passport photo shows a handsome, serious-looking child, and indeed, Jacksonville visual artist Overstreet Ducasse had a lot to process back then.

Now 39, Ducasse was just six when he arrived in the U.S. – one of four kids to follow his father from Haiti.

"His trip was horrendous," he says of his dad's ocean crossing. His father discussed the voyage with him just twice, "and it was first time we had a conversation and I actually cried," recalls Ducasse.

Jailed after reaching the shores of Miami, Ducasse's father lived illegally at first, trying to raise money to bring his over his wife and kids. And while they ultimately traveled by airplane, their arrival wasn't easy either.

"There was a lot of animosity and hatred toward Haitians," he says. "Neighbors used to throw rocks at us."

Making art was how he found solace and connection as a child – particularly key since he was unable to speak English well. "Art to me was a way to communicate," he says.

A Jacksonville resident for the past 11 years, Ducasse still uses his art to communicate – in extraordinarily specific ways. While some artists prefer to leave their work open to interpretation, or are reluctant to share meaning, Ducasse offers painstakingly detailed accounts of each piece – the meaning of every symbol, what he was trying to express.

He created a series he called "the art of alignment," for instance, when he was working as a receptionist at his sister's chiropractic business. Each painting includes the numbers 7, 12 and 5 – symbolizing the bones in the spine's lumbar, thoracic and cervical regions. Another piece represents an ex girlfriend named Dana, and includes images from a cleanse/fast he'd recently completed (lemon, cayenne pepper) as well as a negative pregnancy test stick. And he became so taken with "Age of Aquarius," the song from the musical Hair, that he created several paintings depicting the lyrics -- Jupiter aligned with Mars, etc.

His work is powerful -- evocative, balanced, striking. And while the images often have literal roots, he looks his work as a means of exploring and understanding complex ideas. In discussing one painting, he explains why he was fascinated with the mouth.

"It's the only sense that's capable of doing multiple things: you can use your mouth to speak, you can play an instrument, you can eat, breathe, you can make love, you can use it for violence. It's so unlimited."

Just as deliberate as his effort to communicate intent, Ducasse is clear about what he doesn't want – getting pigeonholed as a black artist. He recalls meeting with an African-American collector whom he says grew disinterested when she saw his art and appeared not to find it "black" enough.

"Do you not think it's 'black art,'" he asks rhetorically. "Why? Because there's not a jazz musician or there's not a slave ship or whatever we're pigeonholed into doing? I don't want to be a part of that. I want to do what I do, what I love to do."

But he plans to continue the series in a very different vein. "I'm working on a target series called 'Celebrating Black History,' and -- people are going to love this -- it's all white people. There's a lot of people contributing to black history that are not necessarily black, and I want to highlight that."

He'd also like to ultimately change the way black history is currently celebrated.

You can see more of Ducasse's work on his website.