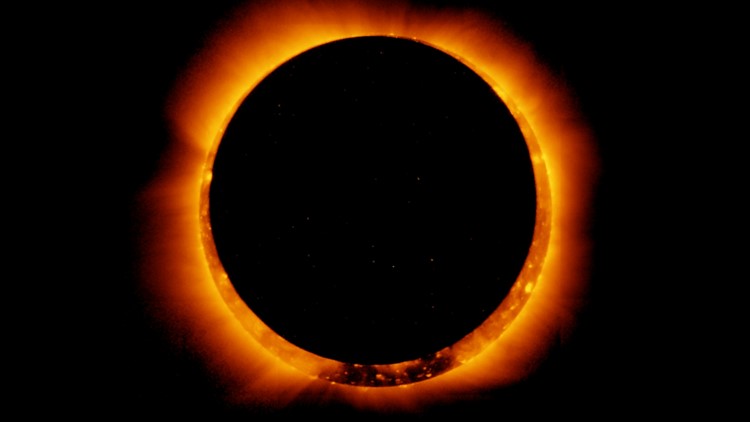 Photo by: NASA
On January 4, the Hinode satellite captured these breathtaking images of an annular solar eclipse. An annular eclipse occurs when the moon, slightly more distant from Earth than on average, moves directly between Earth and the sun, thus appearing slightly smaller to observers' eyes; the effect is a bright ring, or annulus of sunlight, around the silhouette of the moon.

'Ring of fire' will light up the sky on Christmas Day

The cosmos are putting on quite the Christmas show this year – in the form of an annular solar eclipse.

According to Newsweek, it’s a special kind of eclipse that creates a ‘ring of fire’ effect.

Forbes explains the new moon will be as far from Earth as it gets – and will appear one percent smaller – so it’s not quite big enough to completely cover up the Sun.

The eclipse will be directly visible across parts of Asia and Africa. You can watch from the western hemisphere on Dec. 25 – online.

The Slooh Observatory in the Canary Islands will live stream it after 10 p.m. eastern time here: