Veteran-owned brewery in Kannapolis is giving back to military, first responders

Old Armor lets people buy a beer for a military or first responder of their choice. 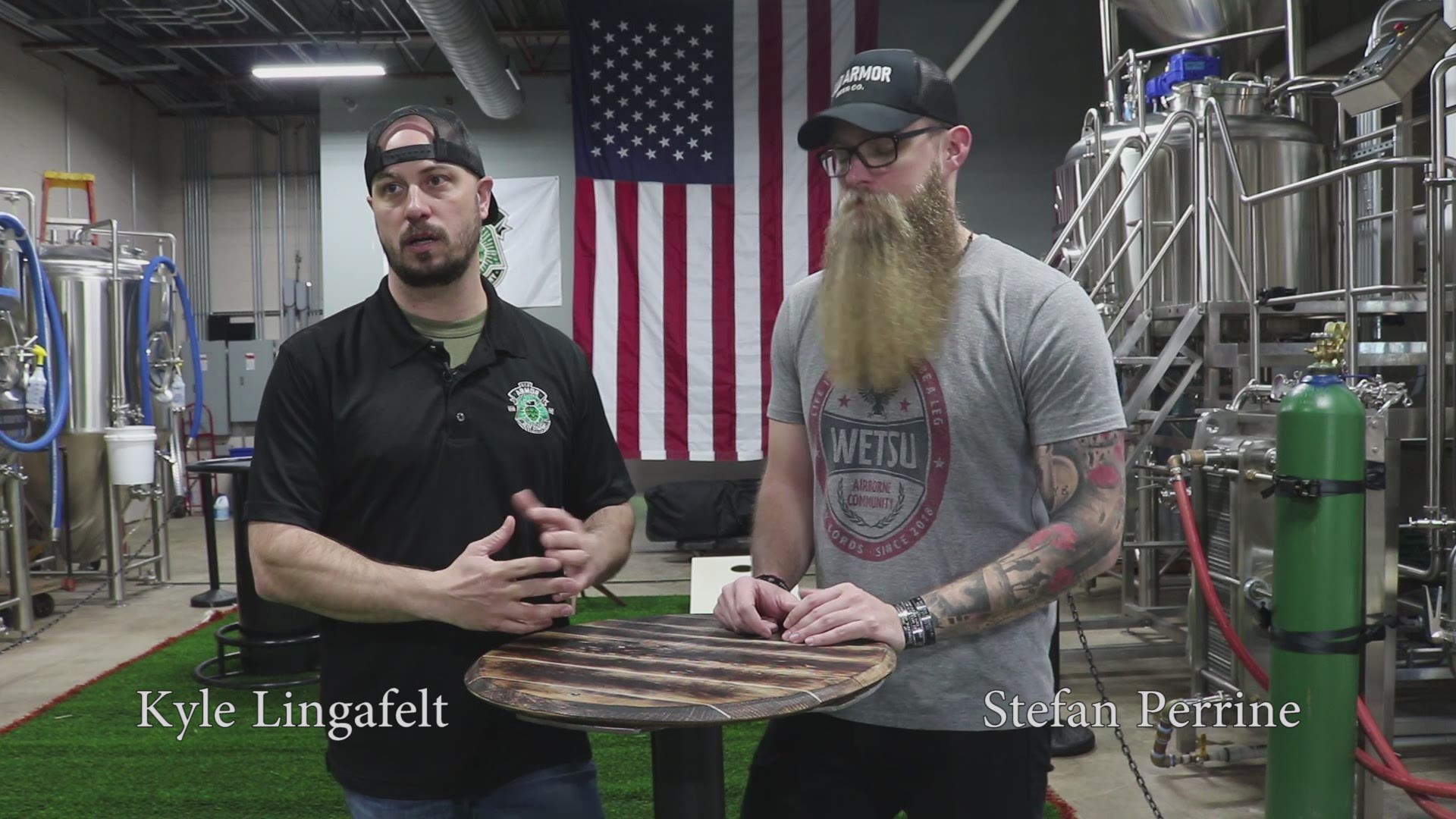 Kyle Lingafelt and Stefan Perrine came up with the idea to start their own brewery in grad school. Both Lingafelt and Perrine served in the United States Army with multiple tours in Afganistan.

Lingafelt said the two began brewing beer as an entrepreneurial project for school.

"We were brewing together and taking some of these brews to tailgates and then the idea kind of blossomed from there," Lingafelt said.

All of the beers brewed at Old Armor are military-themed. The tanks are also military-related and are named after military veterans they look up to.

"The tanks are all named after several military heroes in our eyes," Perrine said. "Guys we’ve looked up to all the way back to War World II to now."

Perrine, the head brewer, said most of the beers have a Belgium, German twist to them and are all a little sweeter.

"That makes it so people who aren’t actual craft beer drinkers, will appreciate the beers; it gets them into the scene," Perrine said. "As opposed to having more bitter and off-the-wall beers."

Old Armor is the first and only brewery in Kannapolis. Lingafelt said he chose the location because he knew how special the area is and said he noticed the lack of breweries in Kannapolis.

"We looked all across the Charlotte area, but we noticed the need here in Cabarrus County," Lingafelt said. "We thought it would be well-received so we went to the city and proposed our idea."

Lingafelt said the city welcomed the idea with open arms and really worked with them, even discussing the city's plan for revitalization.

"We thought this would be a great catalyst for what's to come here in Kannapolis," Lingafelt said.

The two said they really put a lot thought into naming their beers. Usually, they will brew the beer and then the name just comes to them.

For these two military veterans, sticking to their initial goal of supporting the military and first responders in their community is really important to them.

"We started this brewery as veterans as a way to give back to first responders and the veteran community because that was such a big deal to us," Perrine said. "Being veteran-owned is huge because you'll see breweries and corporations that have veterans in it, but to be wholly veteran-owned is showing that we can do more."

Veteran-owned brewery in Kannapolis is giving back to military, first responders

Old Armor Beer Company really gives back to the community. The brewery will make one special batch of beer a month and will donate most of its proceeds to whichever organization they're sponsoring that month.

"We brew a specialty beer and we will advertise for it. We make one batch of it and when it sells, it sells," Lingafelt said. "Cost-recovered and then after that proceeds go to that foundation to help them out."

This month is the redline beer, which will benefit the Firefighters Burned Children Fund.

"So we're looking to do about twelve-a-year," Lingafelt said. "One each month, essentially, where we can give back an organization."

Old Armor also has a Pay it Forward chalkboard, which allows people to come in and buy a beer for some in the military or a first responder.

"We'll mark it on the board, so if we see them come in or someone comes in with their ID – it's already covered," Lingafelt said.

Lingafelt and Perrine said they are really looking to hire veterans to work with them at the brewery.

"We can't just hire all vets, but if we can hire vets -- we will," Lingaselft said.

Old Armor Brewery is having a three-day grand opening this weekend with 12 beers on tap and tons of live entertainment.

"We've been open about a month, our soft opening, working out all of the kinks. We've had very positive responses from the community, so now its time to open the doors officially," Lingafelt said. 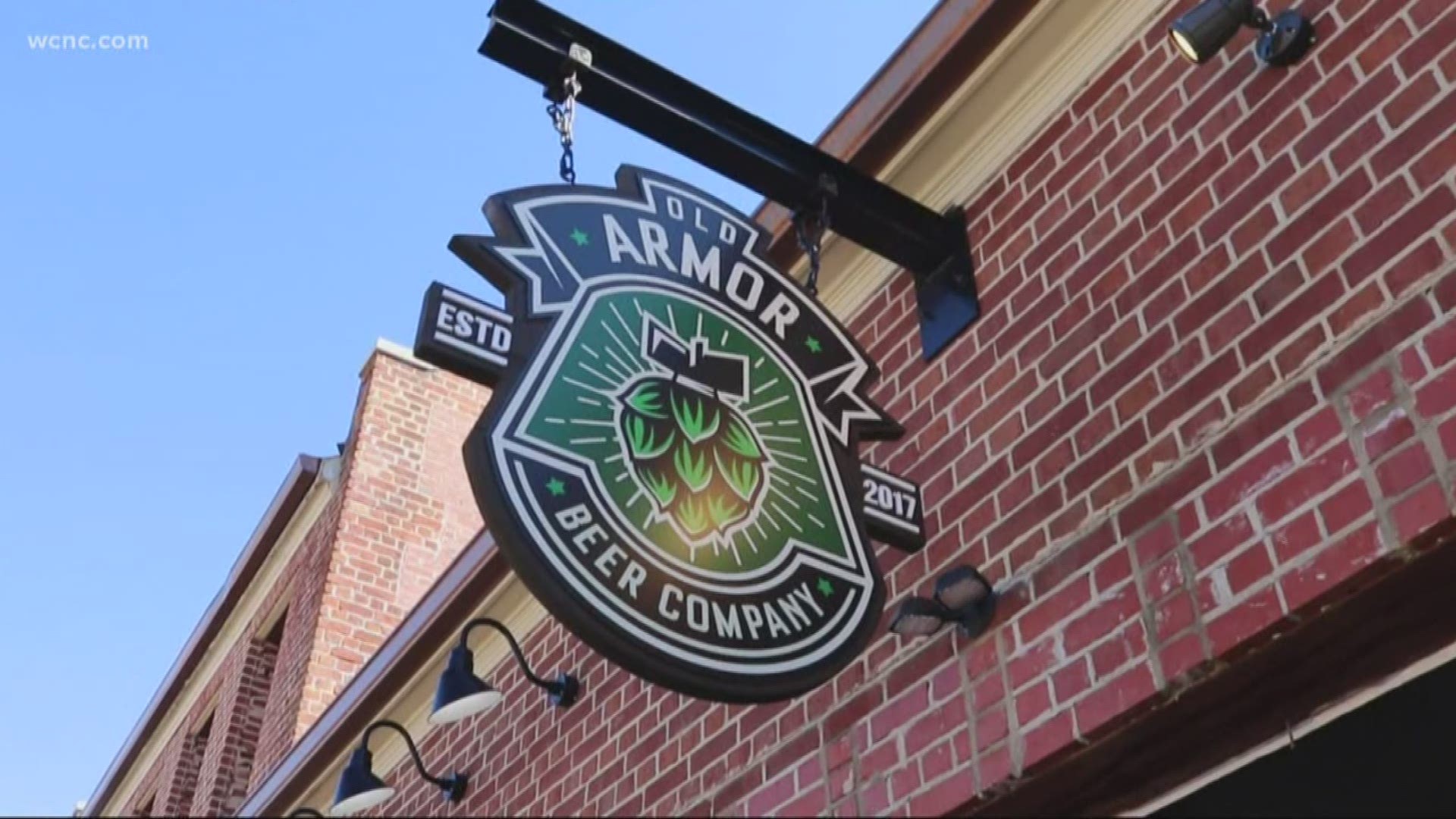