When Amanda May was told one of her tables in the back of the Texas Roadhouse in Orange Park had been sat, it would be the beginning of a new mission in her life. 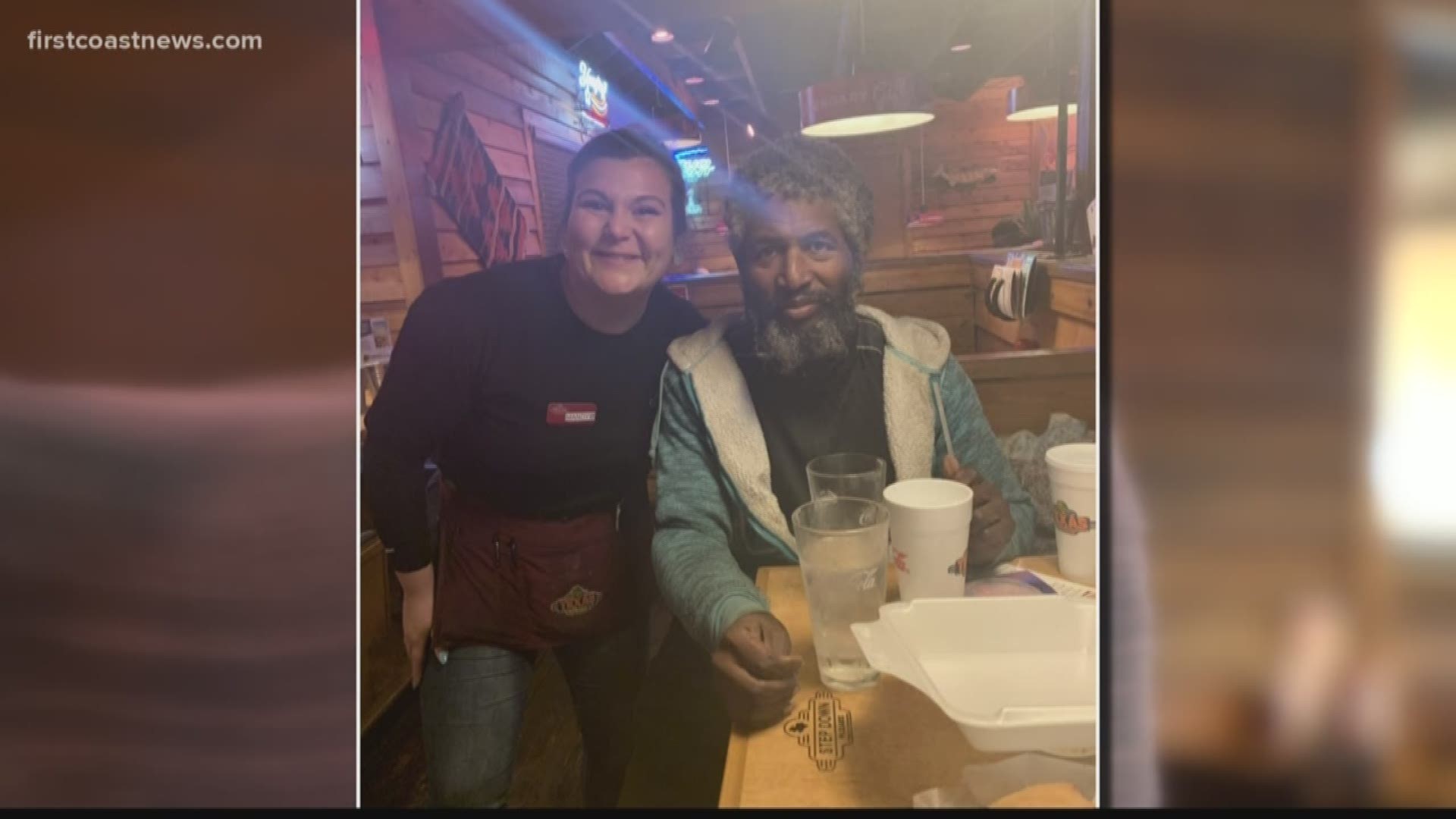 ORANGE PARK, Fla. — Amanda May rounded the corner of her section at Texas Roadhouse off Blanding Boulevard. Tuesday night to look in a booth and see something that would change her mission in life.

The Tennessee-native only recently moved to the Sunshine State, attending Florida State College at Jacksonville and working as a server at the restaurant chain she has come to call "home."

While she was working, the hostess let her know that one of the booths in the back of the restaurant had been sat. May walked to the booth to find Preston sitting down, his possessions in plastic bags beside him.

When she saw Preston, May said she knew what she would do.

Preston ordered a six-piece catfish and a Sprite. He pulled out a $20 bill to show May he could pay, but she told him to put it away.

"I knew I was going to see this man again or encounter him again in my life," May said.

Soon after the first encounter, the table sitting across from Preston asked May if they could pay for his meal. When she told them it had been covered, they bought the man a $25 gift card to the restaurant.

"He had a bunch of Dollar General bags laid up underneath this booth," May said. "I could tell they were physically damaged and they weren't going to last very long."

Later, May decided that she would go to the back and get Preston new bags to carry his belongings. When she was packing the bags, she realized how heavy everything was.

A co-worker came into the restaurant to eat and May asked him to run next-door to buy Preston a new duffel bag for his items.

"I came over here and we packed his bag and it was just emotional," she said. "I was crying."

The next table left nearly a 100-percent tip for May, continuing the chain of good deeds that evening. But the giving would not end in the restaurant.

After May got home, she decided she would write about what happened on Facebook. Her post would gain widespread attention, with a number of people getting in on the effort to help Preston.

"All I was looking for was prayers for this man," she said. "I just wanted everyone to pray for him to see what God could do. And with that, I was so overwhelmed, I was like 'I can't stop, all these people are trying to help. Why do I need to stop?'"

From around the First Coast, people gave May gift cards to pass along, and one person even offered to give Preston a free haircut.

When Preston came back into the restaurant the next day, partly to eat and partly to get out of the cold and rain, May sat him at an unused booth in the back so he could stay until close. Another co-worker paid for his meal that evening as well.

May and a friend would take Preston into a hotel, paying for a room for three nights. Later, May decided to start a fundraiser on Facebook.

Over the coming days, May raised hundreds of dollars from around the country.

"I've had people from New York, Arkansas, Ohio, Washington," she said. "It's been everywhere."

The money she has raised has been used for an extended-stay hotel, as well as food and toiletries. May is also helping Preston fill out documents to get a copy of his birth certificate, and later an I.D.

"Just from likes and shares, this man's whole world could possibly be changed," she said. "I'm gonna keep helping him and helping him until it crosses somebody that can do something outrageous for this man."

May said the support for Preston has been incredible, and that she hopes he will be back on his feet soon.

"I hope people seeing this realize that it's a ripple effect," she said. "Just one thing you could do could go a long way. There's so much that one human being can do for just one person. And even if it's just one person, you made the world a better place."

The fundraiser May started to provide housing for Preston can be found here.