Stephanie and Jeremy Dellinger were thrilled when they had their twins boys. A couple of years later, they were hit with another surprise. Twin girls. 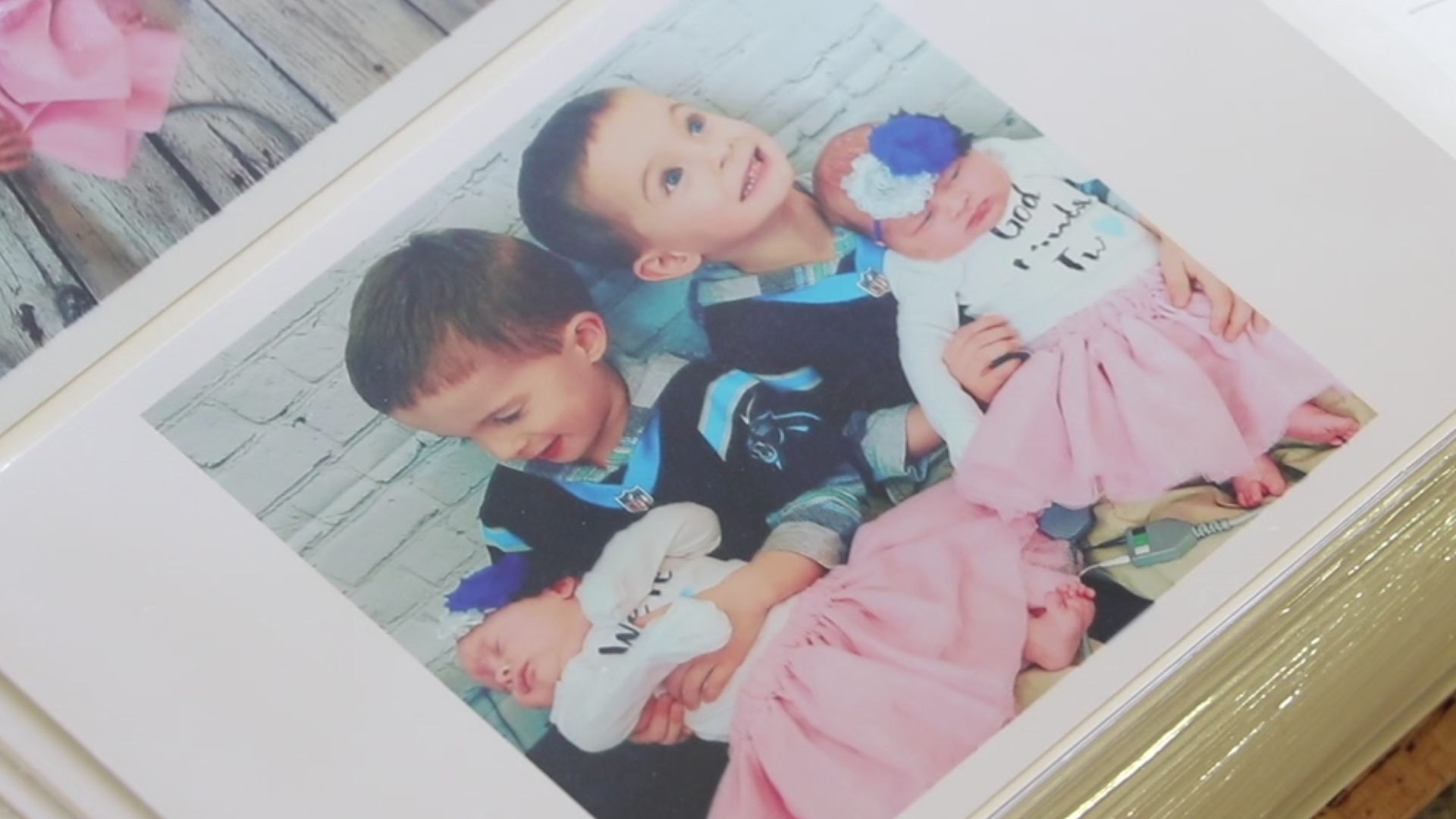 CHARLOTTE, N.C. — Stephanie and Jeremy Dellinger were ecstatic when they first learned they were pregnant four years ago.

“We were excited when we found out we were pregnant. But we didn’t know it was twins at first,” Stephanie Dellinger said.

Stephanie said her husband Jeremy went to every ultrasound appointment with her and pointed to something odd on the screen.

“They did a second ultrasound and Jeremy was like, 'Why is that baby moving from here to there so quickly?' And she was like, 'Wait, you didn’t know you were having twins?'" Stephanie said.

The Dellingers were now twice as excited. They were ready for twice the love. Stephanie said their excitement quickly turned to fear when they learned one of their twins had a serious medical condition which would result in him having to have surgery days after his birth.

"Between 16 and 19 weeks, we found out that one of our boys was going to have some issues that were going to need to be corrected as soon as he was born," Stephanie said.

Asher had a medical condition called Duodenal atresia. The Dellingers said they learned he would need surgery as soon as he was born to remove the blockage from his bowels.

"So that was scary," Stephanie recalled. "There was a lot of things that the doctors had to walk us through. We really had to put all of our faith in God and just really trust that he was going to make everything right and we were going to be OK."

The Dellingers said Asher had surgery the day after he was born at Novant Health Presbyterian Medical Center. Doctors had to treat his Duodenal atresia, but they said he also had twisted bowels and a hole in his heart. Both twins were placed in the Hemby Children’s Hospital NICU.

Both twins were placed in the NICU.

"So that’s a long time to have one kid at home and then another kid in the NICU," Jeremy said. "It's still tough because you want to wake up early and go see your baby but normally Steph would come up all day pretty much."

A few years later, on their anniversary, Stephanie woke up her husband to give him some big news.

They were pregnant again.

Jeremy said he was elated to have another baby. He just had one stipulation.

"I was like OK perfect, you know. I said as long as it's not another set of twins I'll be OK," Jeremy said.

Little did he know.

Stephanie said at about 31 weeks, her water broke. It was too soon to deliver.

"Jeremy took me to the hospital and since we were so early they were trying to do what they could to keep them in as long as possible. The goal was 32 weeks," Stephanie said.

The Dellingers said when they were in the hospital about to give birth to their second set of twins they noticed their original primary nurse was still there.

"I remember seeing Annette (Wiley) and being like, 'I can't believe you’re still here,'” Stephanie said.

So Annette, just like she did the first time, talked them through their second pregnancy. Annette said the minute she met Stephanie she could tell she was terrified.

"We immediately established a bond," Wiley said. "I could tell she was scared to death and it's a whole new experience to have babies in the NICU."

Annette’s son actually had the same surgery Asher had, so she was able to talk the Dellingers through the scary process.

"The nurses in the NICU are there to calm their fears and get them through the trials and tribulations of the NICU,” Annette said.

The Dellingers said they are grateful for Novant Health and all of their talented staff who helped them through both pregnancies.

Novant Health
"My wife and I were blessed in 2015 when we found out that we were expecting identical twin boys! During our boys' NICU stay, we developed great relationships with some of our boys' NICU nurses like...

'He just brings happiness to everyone' | GiGi's Playhouse empowers children, adults with Down syndrome in Charlotte

'God’s divine plan' | They were married for 68 years. They passed away on the same morning