First Coast Foodies takes you into the kitchen with Chef Amadeus for some easy ways you can make your family believe you won a Food Network competition too. 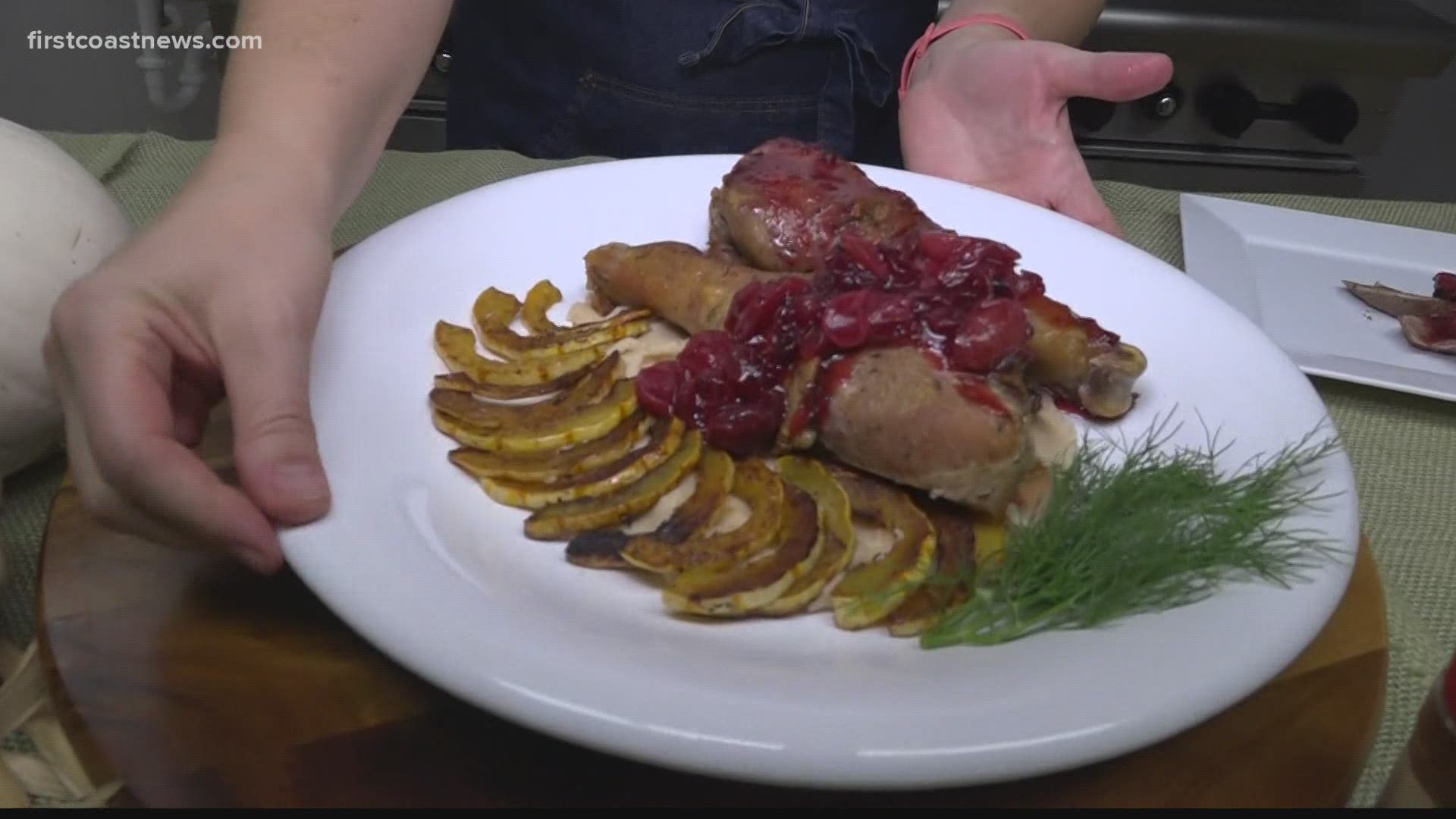 It's the day before we all sit down and stuff our faces with way too much food. In that spirit, we have a special Thanksgiving edition of First Coast Foodies.

First Coast News went behind the counter with a Food Network competition winner to give you ideas on how to spice it up this turkey day.

Believe it or not, what goes down in Chef Amadeus's kitchen can be easy and picture-perfect.

"This is very simple to make!" Amadeus said. "The turkey leg is just the Lil' Bump with the kosher salt on there. That's it."

Lil' Bump is one of Amadeus's own seasonings on his seasoning line. For First Coast Foodies, he created two turkey legs with a tart cranberry glaze dripped on top. This was the first to get eaten.

The cranberry glaze was sweetened with agave, grapes, and Amadeus's Chino 5 seasoning. He says it has low sugar and is a healthier option, which is good for people who have diabetes. You could taste the tartness!

The glazed turkey legs were placed on top of a white bean puree with squash.

"The white bean puree, you get a can of white beans, drain the liquid off of them, puree it, and season with the Lil' Bump and some olive oil," Amadeus said. "You're good to go with that."

He also used the white bean puree as the inside filling to small cucumber sandwiches, which are raw cucumbers with tomatoes on top.

You may have noticed this Food Network Extreme Chef champion just uses a few ingredients, a dash of salt, and his own seasonings.

"This is described as Christmas in a bottle," he said about his Chino 5 seasoning.

Amadeus also made green beans with onions and smoked pig tails as well as pastry puffs with cut apples on top. He says this can be a great substitute for a pie. Don't forget to get creative!

"If you don't know how to make a crust or don't want to make a crust, puff pastry sheets are perfect for this," said Amadeus. "Apples and my Chino 5 with brown sugar."

In this chef's kitchen, cooking feels more like play.

"I'm always talking about the 'what if' factor," he said about his creativity and experimentation with food.

Amadeus says the technique is more important than the recipe. He also enjoys making sure nothing tastes exactly like just one thing.

"I tasted a lot of flavor," said First Coast News after taking a bite of the turkey with cranberry glaze.

"Exactly!" Amadeus jumped excitedly. "You be like, 'wow it went down and just came back up.'"

Since it's Thanksgiving you know we had to ask the chef about the bird.

"Season it up," said Amadeus about the turkey. "Put it in the oven at 500 degrees for about 12 minutes until it starts to brown. Then turn it down to about 250 and let it cook the entire night so when you wake up on Thanksgiving morning it is amazing."

Amadeus says you can also mix mayonnaise with seasoning and put it on the skin of the turkey to keep it moist. He recommends stuffing your turkey with apples and herbs instead of stuffing.

"I want people to have a bumpin' good time in their kitchen with my spices!" Amadeus said.

Spice things up your own way this Thanksgiving!

Amadeus is a personal chef who has been doing virtual cooking classes this year.

Learn here how you can catch Amadeus at the fundraiser Seasonings Greetings with Chef Amadeus on December 3. The fundraiser supports Community Health Outreach, where Amadeus is a board member.

RELATED: Not cooking for Thanksgiving? These First Coast restaurants, businesses will do it for you