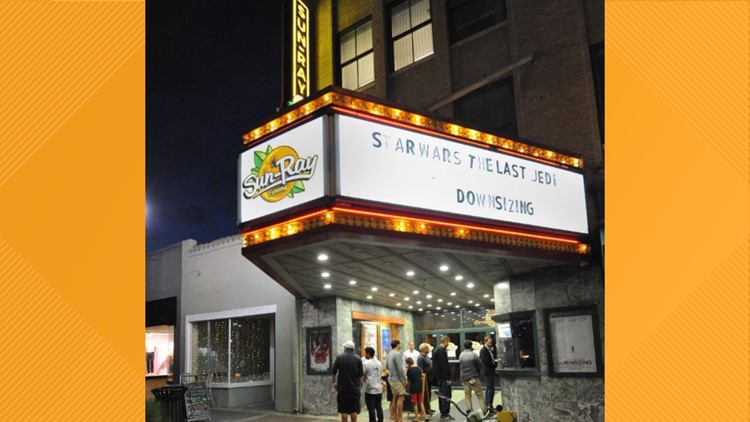 Photo by: Will Dickey/Florida Times-Union

JACKSONVILLE, Fla. — Sun-Ray Cinema in Five Points is setting the table for food lovers as well as movie fans by opening a full-service restaurant just two doors down from the popular Jacksonville movie theater.

The historic movie theater at 1028 Park St. has long been a popular dining destination for its menu of innovative vegan fare along with classic movie munchies — all freshly made in their own kitchen.

Co-owners Tim Massett and Shana David-Massett are shining a spotlight on the theater’s cuisine by putting it center stage in a sit-down restaurant, Sun-Ray Cinema Pizza Cave at 1018 Park St. — just a few steps away from the theater lobby.

The husband and wife entrepreneurs hope to open Pizza Cave by the end of the year. The 36-seat restaurant will offer carry-out and delivery, which already comprise a significant portion of the theater’s business, David-Massett said.

“We have so many people who are coming just for the food. They come and they sit in the lobby and they eat on their lunch break or they come out for a snack or dinner in the evening. Or they order take-out or delivery,” David-Massett said.

Pizza Cave will serve the theater’s “entire existing menu plus a few a few options that are logistically too difficult to serve in a movie theater setting in the dark in a row with other people,” David-Massett said.

The menu showcases Sun-Ray favorites such as their pizzas and vegan dishes.

Among the most popular pizzas are traditional cheese; Black Lagoon Supreme with sausage, pepperoni, mushrooms, garlic and kalamata olives; the vegan Bold New City of the South with ricotta, roasted tomato, roasted garlic, mushrooms, kalamata olives and hummus; the Godbold with pulled pork, sweet pickles and a barbecue sauce swirl; and the the Zaat with kimchi and a fried egg sprinkled with spirulina.

Appetizers will include popcorn as well as nachos, fried pickles, hummus with chips or vegetables and french fries with optional toppings including chili or in the case of the Swamp Fries, kimchi, egg, marinara, queso and a sprinkle of spirulina.

Most items on Sun-Ray’s menu have a vegan version.

The vegan options, David-Massett said, have become “one of most wonderfully dynamic elements of our menu,” and have fueled a significant amount of their menu’s success.

“When people have a place to go and sit next to their pepperoni-pizza-eating friend and eat a vegan pepperoni pizza, they are just so happy,” said David-Massett, who isn’t vegan but advocated for those choices when they opened Sun-Ray.

Sun-Ray makes all its vegan cheese in house. It has vegan chili cheese fries, milkshakes, sandwiches and pizzas. It’s the way they’ve always done it.

In addition to a selection of sodas, they plan on having beer on tap and wine by the bottle or glass at the restaurant, she said.

They also expect to serve their Beer Shake, which is silky ice cream blended with a tasty stout and undertones of coffee and chocolate.

Pizza Cave is a reboot of Tim Massett’s longtime dream.

When they opened Sun-Ray seven years ago, Massett wanted to convert the ticket booth into a “pizza-by-the-slice joint” for the late-night crowd especially on Friday and Saturday nights.

“We called it the Pizza Cave because the ticket booth felt like a little cave. We decorated it with a cave-theme,” David-Massett said.

Alas, in 2012, the box office Pizza Cave collapsed “as all caves do,” David-Massett said. Nonetheless, they kept talking about having a restaurant and had started looking for possible sites.

Out of the blue, the retail space nearby became available.

Not only was space close but it shared access to the theater’s kitchen, she said.

“We said, ‘that’s our spot’. We’re just going to put in a seating area where you can just come and sit and eat your chili cheese fries and talk as loud as you want because you’re not in the lobby of a movie theater,” she said.

It also reminded them of their original ticket booth Pizza Cave, so they jumped at the opportunity.

David-Massett said respected Jacksonville artists Shaun Thurston, who painted the murals decorating Sun-Ray Cinema, and visual artist Crystal Floyd will be creating the artwork for the Pizza Cave. There also will be sculptural elements to create an extension of the movie theater lobby into the Pizza Cave, she said.

The current theater opened Dec. 9, 2011. It previously was known as Riverside Theater and 5 Points Theatre. It was the first theater in Florida equipped to show talking pictures, originally opening in March 1927.

Pizza Cave is the most recent venture in their expansion of Sun-Ray Cinema. On Sept. 28, the couple announced plans to open a second movie theater in a former Mandarin department store.

The planned five-screen theater with a total of 600 seats will be among several tenants in the former Kmart, 9600 San Jose Blvd. Sun-Ray will occupy one corner of that 105,737-square-foot property, which also will have restaurants and retail shops.

No theater opening date has been announced. Once the Mandarin theater is done, the Five Points theater will undergo some renovations but will remain open during that work.

Five Points boasts and eclectic mix of restaurants in a highly competitive market.

There are about 30 restaurants within roughly a two-block radius of the iconic Five Points roundabout. Parking also can be challenging. Those factors contributed to the abrupt closing of the nearby Derby House Diner on Monday.

Pizza Cave will open with a loyal following — many of them vegans.

“If you’re not a vegan, you know a vegan and you like to go out with them. So it’s a really exciting thing for Jacksonville generally to this robust of a menu that has vegan options and non-vegan options,” she said.

David-Massett said although the area gets crowded, extra parking is available on Margaret Street behind the theater.

The couple opened Sun-Ray with three employees. Currently, they have 17 employees and are looking to initially hire three more including line cooks for the Pizza Cave, she said.

The restaurant will have the same hours as the theater and will be open every day of the week.

“We’re so excited to see the community’s response to it,” David-Massett said.