Distilleries - considered essential businesses - say an old law prevents them from following the governor's order to conduct sales online as much as possible. 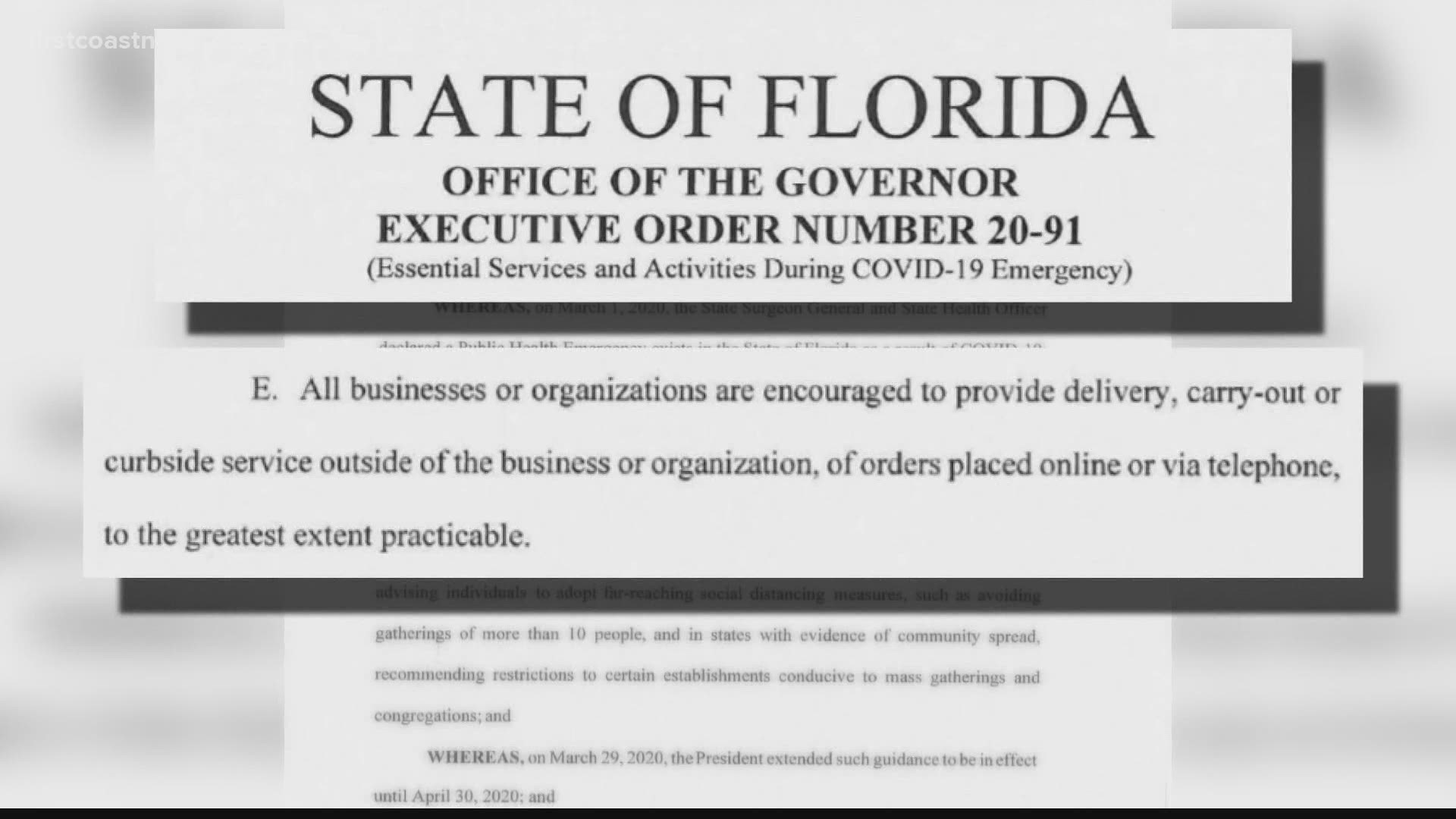 ST. AUGUSTINE, Fla. — There are about 25 craft distilleries in Florida, and St. Augustine Distillery co-founder Philip McDaniel says they’re all caught in a COVID-19 crisis contradiction.

“All of this product is sitting here and it’s taxes waiting to be collected,” he told First Coast News in an online video interview Tuesday, gesturing to pallets stacked floor-to-ceiling with gin, bourbon and other popular liquors distilled on the premises in St. Augustine’s Lincolnville neighborhood.

“That says ‘if you’re an essential business, we strongly encourage you to be able to take your orders over the phone and online,’” McDaniel cited.

That would apply because distilleries and other businesses within the alcoholic beverage industry are considered essential. But there’s a much older statute – whose origins McDaniel said trace back to the Prohibition Era – which states, in part, that “A craft distillery may not ship or arrange to ship any of its distilled spirits to consumers and may sell and deliver only to consumers within the state in a face-to-face transaction at the distillery property.”

Hence the dilemma. Craft distilleries have long been lobbying the state government to ease restrictions that don’t apply to craft breweries and wineries. The restrictions don’t allow distilleries to ship product, limit the quantity an individual person can buy in a calendar year, and prohibit the consumption of the product on the premises of a distillery apart from free tastings.

“These are very draconian laws that have just been here, in a lot of ways senselessly, for a long time,” David Cohen of Manifest Distillery in Jacksonville contended. “By not allowing that [online] sales process to happen, obviously it’s not doing anything to help strengthen our economy, which is something we all need right now.”

Both men said restaurant and bar closures have screeched their distribution sales to a near standstill, and moribund gift shop activity has cost them even more. They also agreed that the losses are as multifaceted as they are confounding.

“In 2019 the state collected a little over $7 million in state sales tax from craft distilleries,” McDaniel said. “And they also collected another almost three-and-a-half or four million dollars in state excise taxes on the sales of distilled spirits.”

McDaniel said his sales are off “literally 90 percent” in the last eight weeks, perplexed that state government would create a contradiction, knowingly or not, that inevitably impacts both the economy and tax revenues.

“This is about every distillery in the state of Florida right now, who needs this clarification. And that’s what we’re asking the governor to do.”

He said the distilleries themselves aren’t alone in reaching out to Governor DeSantis. McDaniel said that in the previous 24 hours, some 3,000 people had emailed the capitol using a link on the Florida Distillers Guild web page.

But he said it’s also about jobs. The St. Augustine Distillery has had to furlough 70 workers, and McDaniel said merely allowing online sales would help him hire at least a handful of his employees back.

“We would be taking orders online, we would be needing people to pack up and ship those orders, and we feel that it would be a pretty respectable number," he said. “Even if we hired back one or two, that takes them off the state unemployment and puts them back to work. It would be a good thing.”

McDaniel said there would be at least one more positive consequence.

About mid-March, St. Augustine Distillery – like many others nationwide – began manufacturing hand sanitizer, using a potent by-product from the distillation process called “heads.” Some of the distillery’s aptly labeled “Heads Up” sanitizer has sold in the company’s gift shop on Riberia Street, but much of it has been donated.

“This is helping our first responders, hospitals, hospice,” he said. “We’re really grateful to be able to make and in many cases, give it to them.”

But even with sales of sanitizer, McDaniel assured that the future is precarious for St. Augustine Distillery and many if not all other craft distilleries in Florida.

“The problem is, we can’t survive just by making [sanitizer] alone,” he sighed. “If I can sell this,” he said, holding up a bottle of bourbon in his right hand, “then I can make more of this,” lifting a bottle of sanitizer with his left. “And that’s really the goal here.”

McDaniel and Cohen are in one sense competitors even though they operate about 40 miles apart. But it doesn’t take long talking with either one of them to learn that there is unmistakable solidarity among them and their counterparts, “from the panhandle to the Keys,” as McDaniel put it, listing most of the locations by heart.

They also both hinted an apparently like-minded optimism – even if a cautious one - that the governor will heed their appeal.

“Realistically, this could come tomorrow,” Cohen said of how soon action could be taken.

“It would make an awful lot of sense because you’re going to bring people back to work and you’re going to save businesses from closing,” McDaniel detailed. “You’re going to allow more hand sanitizer to be produced, which will help communities get back on their feet. And also generate some tax revenues. It’s a really win-win all the way.”