Booze-to-go sales brisk, despite uncertainty about their legality

Restaurants, bars and even ice cream trucks are selling mixed drinks to-go -- but are they legal? 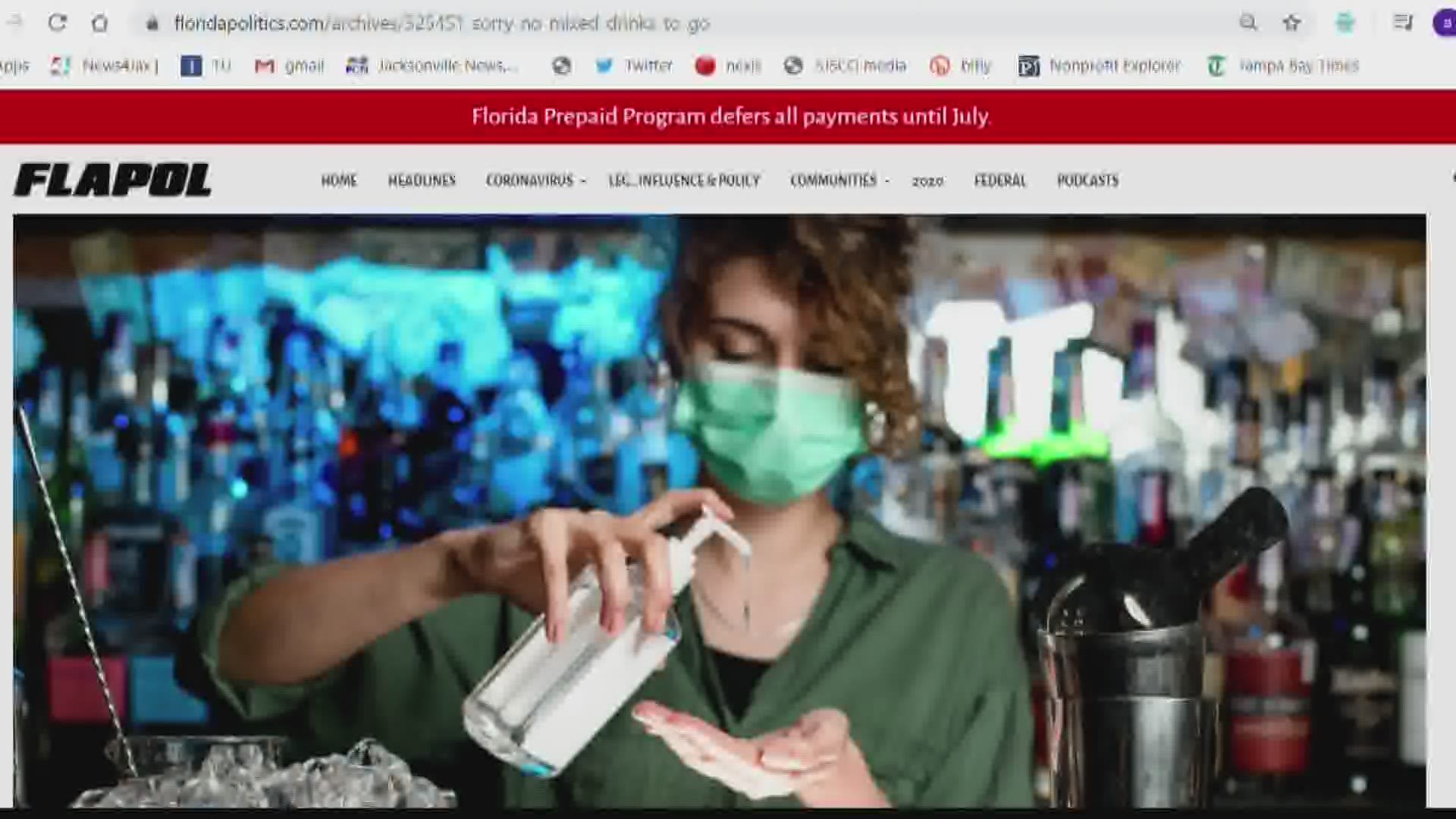 Florida has long permitted package sales at drive-through liquor stores, and more recently begun allowing breweries to refill growlers. But the state has traditionally drawn the line at mixed drinks to go.

The coronavirus changed that. Restaurants and bars are now selling sell cocktails, wine and beer in cups and other containers to be consumed off-premises. Mixed drinks are widely advertised on restaurants websites and Instagram pages. An ice cream trunk in St. Augustine even promises “wine pops and vodka cups” – and it doesn’t even have a liquor license.

But while sales are brisk, the rules are fuzzy.

Gov. Ron DeSantis’ March 20 executive order allowed bars and restaurants to sell alcoholic beverages in sealed containers for carryout. The keyword is “sealed.” Initially, the state Florida Division of Alcoholic Beverages and Tobacco, which is tasked with enforcing liquor laws, said that requirement prohibited the sale of mixed drinks.

“The sale of alcoholic beverages in sealed containers for consumption off-premises requires the containers to be sealed by the manufacturer,” the agency said in a document posted to its website.

They backed that up with substantial threats. ABT agents told bar owners in Gainesville they could be fined up to $1,000 per drink for violations.

But within days, the online publication Politico reported, Gainesville police Chief Inspector Jorge Campos said he’d been told the agency reversed its original interpretation and relaxed the rules. (That article is no longer posted online, but is referenced in this Politico newsletter.)

Restaurant owners across the First Coast, though reluctant to draw undue attention, say they’ve received similar assurances. The restaurants said they’d received an advisory from Department of Business and Professional Regulation, the umbrella agency over ABT. When asked for a copy of the advisory, they all sent copies or excerpts of the same story – a March 28 article in Florida Politics, titled, “State regulators now say yes to cocktails to go.”

The story cited an “advisory” from DBPR relaxing the rules on cocktail sales, and included this paragraph:

“After consulting with the Secretary, the Governor, and ABT Leadership, we are relaxing the ‘sealed alcoholic beverage requirement,’ the advisory declares. “Effective immediately, licensees can sell cocktails, wine and beer in cups, jugs and other reasonable containers, as long as the alcoholic beverage is for consumption off the licensed premises. We aren’t going to tell the licensee how to seal the cup. The thought behind this is not to be an impediment to business at a time when most, if not all are suffering economically.”

Asked about that advisory, a DBPR spokesperson told First Coast News he had “no idea” where it came from. In a written statement, Patrick Fargason said, "This language is not an advisory posted by, or on behalf of, either the Division of Alcoholic Beverages and Tobacco or the Department."

The Florida Restaurant & Lodging Association, the trade group that represents the hospitality industry, posted the Florida Politics story to its website. It also sent members an email citing “official word” from DBPR that cocktails to go were OK. But the hyperlink in that email was to the Florida Politics story, not DBPR. When First Coast News asked FRLA for any specific information regarding a relaxation of the rules, they sent a copy of Gov. DeSantis’ original order, requiring “sealed” containers.

A FLRA statement avoids any direct mention of to-go cocktails.

“Governor DeSantis continues to lead and take swift action out of precaution for the safety of Florida residents and visitors,” said Carol Dover, President & CEO of FLRA. “Allowing restaurants to stay open for delivery and take-out, while also lifting the ban for alcohol delivery, is critical to supporting Florida’s dining establishments and their employees. We applaud Governor DeSantis for allowing Florida’s hospitality industry to continue to meet the needs of communities across Florida during this difficult time."

The reporter who wrote the Florida Politics article says it’s his understanding DBPR has since disavowed the advisory as an “unauthorized” communication from an agency employee.

At least one bar owner said he was feeling caught in the middle, getting pressure by local law enforcement and unsure of his legal footing.

“I had an enforcement agent tell me it’s OK to serve in styro with a lid,” he said, noting that agents from the state said the opposite. “None of these agencies are communicating with each other and they sure aren’t doing anything but giving us moving targets and then threatening our license.”

RELATED: These states have issued stay-at-home orders, here's what that means