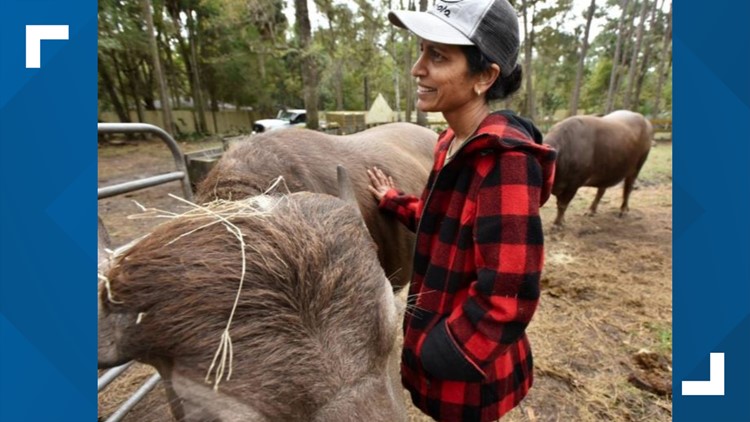 Photo by: Will Dickey/Florida Times-Union

Punita Patel keeps a pair of Muck boots handy for getting around on her four acres in Palm Valley, not far from TPC Sawgrass and some high-end shopping.

She calls her place Backyard Buffalo. It’s a fitting name, since that’s where she tends to eight water buffalo in her backyard — animals that remind her of her childhood home — along with some sheep, chickens and honeybees.

Oh, and there’s also Koko, an 80-pound Great Pyrenees, her farm dog. But he’s still getting the hang of this whole farm-dog thing.

“What I think his job description is is very different from what he thinks it is,” Patel notes.

She got him to protect the farm animals from the wild things of greater Ponte Vedra, mostly though he seems to want to just protect her, which involves much nuzzling.

Backyard Buffalo is a micro-dairy that sells its goods (yogurt is the most popular item) at local farmers markets.

Patel says she was at first uncertain about asking others to buy what she makes, but she’s comfortable with it now, quick with a smile and ready with sample after sample of her wares.

She’s gradually built a steady group of regular customers, many of whom follow her buffaloes and life on the farm in Patel’s good-natured, humorous posts on Backyard Buffalo’s Facebook page.

It all started a few years ago. Patel was craving the creamy, rich taste of the water buffalo milk she’d grown up with in her native India, but she couldn’t find some that could be delivered.

Patel was hooked on her new life tending to her buffaloes, giant horned creatures with an important link to Florida: The first commercial water buffalo herd was established in America in 1975 through the University of Florida.

“One thing I was not sure of was if I was going to be able to fall in love with them,” she said. “I wanted to be a good caretaker, but I didn’t know if I had it in me. I was doing it for the milk. But I fell in love the night Goldie came ... I looked at her, she looked at me, it was a human connection. It’s pretty powerful. I think that’s what keeps me going.”

Patel was raised in a middle-class family in western India, north of Mumbai. Her journey to America began when her mother left her husband, an alcoholic, a move that clashed with the culture there.

“That’s part of the reason she wanted to come here, to get away from that sort of social shunning she was getting,” Patel said.

As a teenager, Patel said she was reluctant to go to America; she didn’t speak English, and her whole life was in India.

But Lufkin, Texas, where uncles lived, would soon be a new home for Patel, her sister and their mother. Lufkin, however, was not how she had pictured America.

After college, Patel, who is 46, became a traveling nurse, working in states across America (she says she feels most like a Californian).

She worked as a neonatal nurse before staying home to raise her two daughters. She moved to North Florida from Missouri when her physician husband, Akash Sharma, took a position at Mayo Clinic.

“I didn’t know what I was going to do with my midlife,” she said. “I’m glad I found this.”

She got invaluable help when she put an ad for a “backup milker” in a community newspaper. Dan Stone, who was mostly retired, answered the call. He figured it was better than doing Sudoku, and it got him in touch with his youth, growing up on a dairy farm in upstate New York.

He gave invaluable advice, pitched in on construction projects — the milking shed, the chicken coop, drainage issues — and quickly came to admire Patel, who was lugging 80-pound bags of concrete alongside him.

Stone still comes to volunteer at Backyard Buffalo, even though he’s since moved near Daytona Beach. Stone said he’s never seen Patel get discouraged by the hard work.

“Part of this it’s that immigration gene. If you’ve got enough balls to leave everything behind and start anew, you’re special, you’re in a different class than those of us who grew up in America,” he said. “If you’re able to do that, you’re pretty much able to do anything.”

Patel agreed. “Absolutely. I think it was a defining moment when Mom left. Those are hard things in life that you go through. But those hard things also change you and get you ready for the next challenges in life.”

Patel said that having water buffalo instead of cows doesn’t mean she has to follow any special regulations, though since the animals are used for dairy they have to be tested annually for brucellosis and tuberculosis.

Selling what she made at Backyard Buffalo started off slowly. At first she sold plain buffalo yogurt, her favorite. It was not a hit.

“I came home with whatever products I went to market with, sold almost nothing for several weeks. Maybe several months,” she said.

She found more success when she began mixing in flavors, trying to appeal to American palates.

Add Indian flavors, she told her daughter. Soon her yogurts and dips had flavors such as cardamon, carrot-pickle, sour cherry, jalapeno pickle and cucumber-onion.

It turns out people liked it, and business grew, especially at the Neptune Beach market on Saturday afternoons, where Patel said she found a welcoming community with an adventurous palate.

Her yogurts with water buffalo milk began to sell out; the animals don’t produce as much milk as cows. So Patel started using cow milk from Wainwright Dairy in Live Oak, which makes deliveries to her each week.

Patel says she learns from her customers, too, who she meets face-to-face every week, telling her what they like.

“It just made me bolder, doing the market, being accepted, a little at a time. Now we are flat-out, unabashedly Indian with some of the things Mom makes. I’m doing what Mom was doing, what we had been so good at doing for centuries.”