The whale calf washed up on the northern part of Anastasia State Park Saturday. 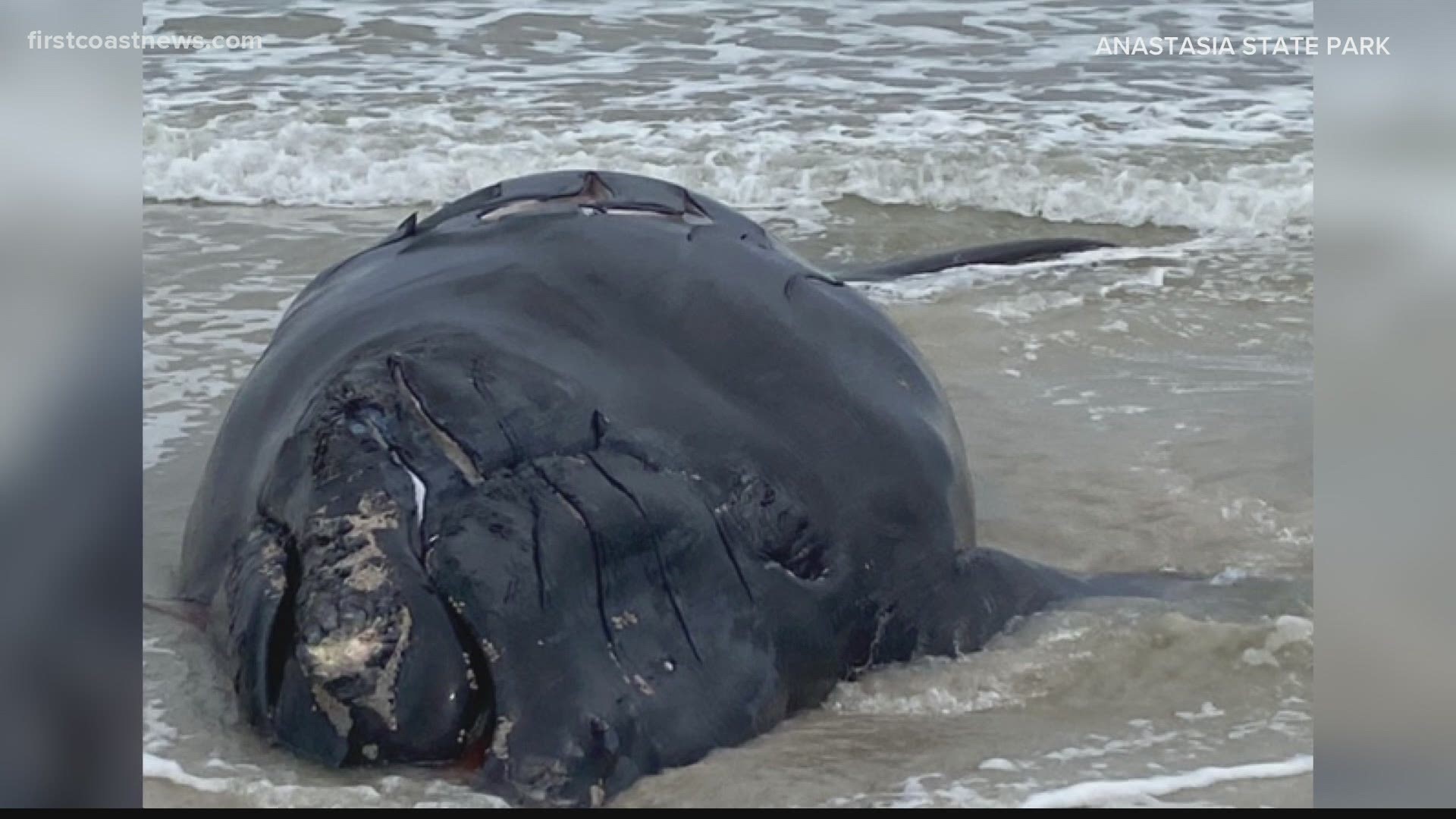 ST. AUGUSTINE, Fla — A right whale calf died after colliding with a boat just outside the St. Augustine Inlet Friday evening, according to the Marineland Right Whale Project director and officials with the National Oceanic and Atmospheric Administration.

The calf washed up on the northern part of Anastasia State Park Saturday morning between the St. Augustine Inlet and the bathhouses for Anastasia State Park, with "severe" injuries from a propeller, Jim Hain, the director of the Marineland Right Whale Project, said.

Chris Pacetti with the St. Augustine Fire Rescue told First Coast News that around 6:48 Friday evening, he and other rescue crews responded to a call regarding a boat taking on water in Salt Run, not far from the Inlet. Pacetti said five people were rescued from the sport fisherman boat, as well as some equipment and belongings. All occupants aboard stated they “hit a whale and began taking on water quickly," Pacetti said.

Blair Mase with NOAA confirmed the boat that collided with the calf was a sport fisherman boat coming in for the day, but she could not confirm that the boat grounded in Salt Run was the exact one that struck the whale Friday evening.

She said right whales, the most critically endangered whales in the world, are extremely vulnerable to both vessel strikes and entanglement injuries.

"Oftentimes, most of their [whales'] bodies are underwater, and then they come up to breathe," she said. "So, they are super susceptible because of that, and also because they travel and migrate and spend time this time of year so close to shore.”

Right whales mate up north, then migrate to warmer waters to have their babies, and swim close to shore while forming relationships with their calves.

The other calf died off the coast of North Carolina in November of 2020 during birth or shortly after, according to Mase.

"In the blink of an eye, we wake up this morning and have what really feels like a heartbreaking tragedy occur right here in St. Augustine," Mike Alyea, a volunteer with the Marineland Right Whale Project, said. "It has been a very tough day for everyone who loves these animals," he said.

Alyea volunteers with the survey team with the Marineland Right Whale Project. He said right whales are frequently spotted anywhere from 200 yards offshore out to a quarter or a half a mile offshore.

The Florida Fish and Wildlife Conservation Commission analyzed the right whale calf Saturday on the beach. It is 22 feet long and four inches.

Researchers studied and buried the whale calf on Sunday. The biologist leading the necropsy said it had broken ribs and a broken skull. She said the cuts in its body were evidence of a boat strike.

The St. Johns County Sheriff’s Office, St. Johns County Fire Rescue and the United States Coast Guard all assisted on scene. Florida Fish and Wildlife Conservation Commission and the University of Florida, among other agencies, also responded Saturday morning documenting wounds on the whale, according to Mase. NOAA is the lead agency on the investigation.