Rep. Jamie Raskin: The tragic death of a son, surviving an insurrection, and now leading impeachment

The representative from Maryland is the lead House impeachment manager. But more importantly, he's a father. 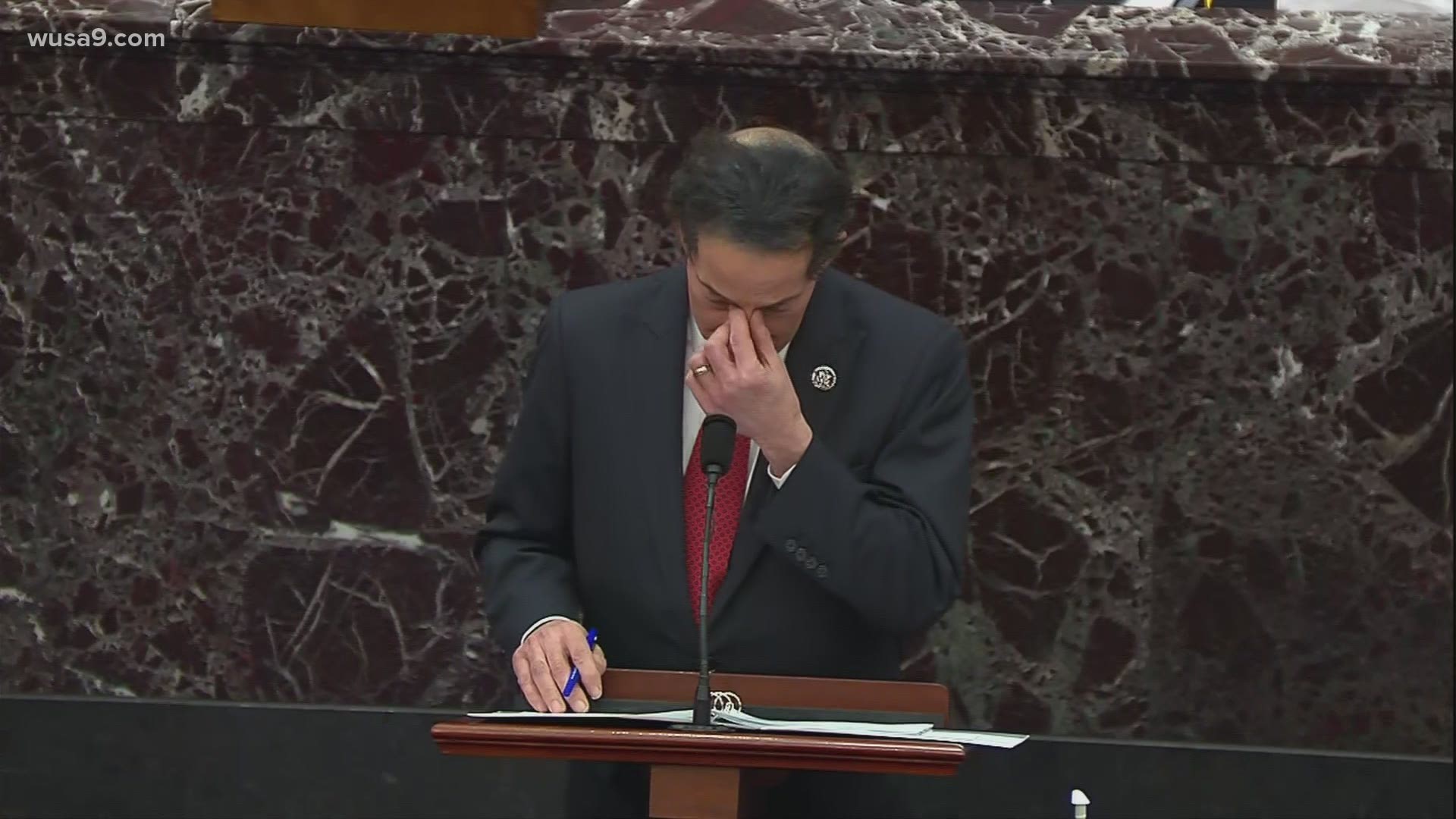 WASHINGTON — On January 6, Maryland Rep. Jamie Raskin helped tally the final votes to certify Joe Biden as the 46th President of the United States. As a member of the House of Representatives, the move to count might not be seen as abnormal from those watching. But 2021 was already far from normal, especially for Raskin.

Less than a week prior, Raskin was burying his 25-year-old son, Tommy. And in just a few hours after speaking on election results, he would be one of the hundreds of lawmakers trapped inside as rioters began an assault on the U.S. Capitol, spurring an insurrection that would eventually lead to a second impeachment.

Now, just weeks later, he's leading the arguments to convict President Donald Trump on the charges of incitement of insurrection.

While it's unclear whether House impeachment managers will call witnesses, Raskin didn't need them for Tuesday. Instead, he shared his own affidavit.

'The most haunting sound I ever heard'

Raskin led Tuesday's opening of the Senate impeachment trial with a fierce mix of personal testimony and specific outlines for how Trump incited the crowds of rioters to violence, showcasing the video where he told protesters to "fight like hell, or you aren't going to have a country anymore."

More powerfully, the Maryland congressman detailed the horror that he felt from inside the Capitol building, recounting his experience of seeing his younger daughter Tabitha -- and other family relatives -- fear for their lives.

"The kids hiding under a desk, placing what they thought were their final texts and whispered phone calls to say their goodbyes. They thought they were going to die," he shared, choking up.

Raskin's daughter Tabitha and her husband Hank were at the Capitol on January 6 to witness Congress affirming electoral college votes, Raskin said. Before making the trip, Raskin said they asked him if it would be safe. He told them "of course it should be safe. This is the Capitol."

What was supposed to be a peaceful transfer of power resulted in him fearing he would also lose his daughter just weeks after losing his son.

“My son-in-law had never even been to the Capitol before," he shared on the Senate floor, pausing multiple times to gather his emotions. "When they were finally rescued over an hour later by Capitol officers, and we were together, I hugged them and I apologized. I told my daughter Tabitha how sorry I was and I promised her that it would not be like this again the next time she came back to the Capitol."

He took a moment, looking down at the floor.

"And you know what she said? Dad.. I don't want to come back....and of all the terrible brutal things I saw and I heard on that day, and since then, that one hit me the hardest."

'An irreplaceable brother, a radiant light'

Raskin, 58, represents Maryland's eighth Congressional district. He lost his son Tommy on December 31, 2020. He and his wife Sarah penned an emotional tribute to their son in a Medium post, chronicling Thomas' kind demeanor and compassionate nature that led him to success inside and out of the classroom.

“On the last hellish brutal day of that godawful miserable year of 2020, when hundreds of thousands of Americans and millions of people all over the world died alone in bed in the darkness from an invisible killer disease ravaging their bodies and minds, we also lost our dear, dear, beloved son, Hannah and Tabitha’s beloved irreplaceable brother, a radiant light in this broken world," Raskin penned.

Tommy, a graduate of Amherst College, was planning on following in his dad's footsteps and attending Harvard Law School. Raskin shared that while the grief of losing his son so tragically continued to rock him and his family, the note Tommy left behind has stayed with him.

"Please look after each other, the animals and the global poor for me. All my love, Tommy."

You can read Rep. Raskin's full heartfelt tribute to his son, Tommy, here.

What's next for impeachment

The Senate voted 56-44 to continue with the impeachment trial, with six Republicans voting in favor. The Senate needs to vote in a 2/3 majority to convict former President Trump, meaning Raskin needs to convince another 11 of his GOP colleagues.

It's unclear whether or not the Senate will hear from witnesses, which is likely to prolong the trial. Raskin had already asked for sworn testimony from Trump last week, which the former president declined and his defense called "a publicity stunt."

The remaining trial will hear from additional House impeachment managers under Raskin's leadership, with an equal opportunity from Trump's legal defense to ask their own.

Lastly, the senators will have their own time to state their arguments and make a final verdict.

RELATED: WATCH LIVE: The second impeachment trial of Donald Trump has begun. Here's what to expect

RELATED: VERIFY: Who are the impeachment managers and what do they do?