What to expect for Orange Crush Festival this weekend

The festival is expected to draw 20,000 people with party events around Jacksonville and its beaches. 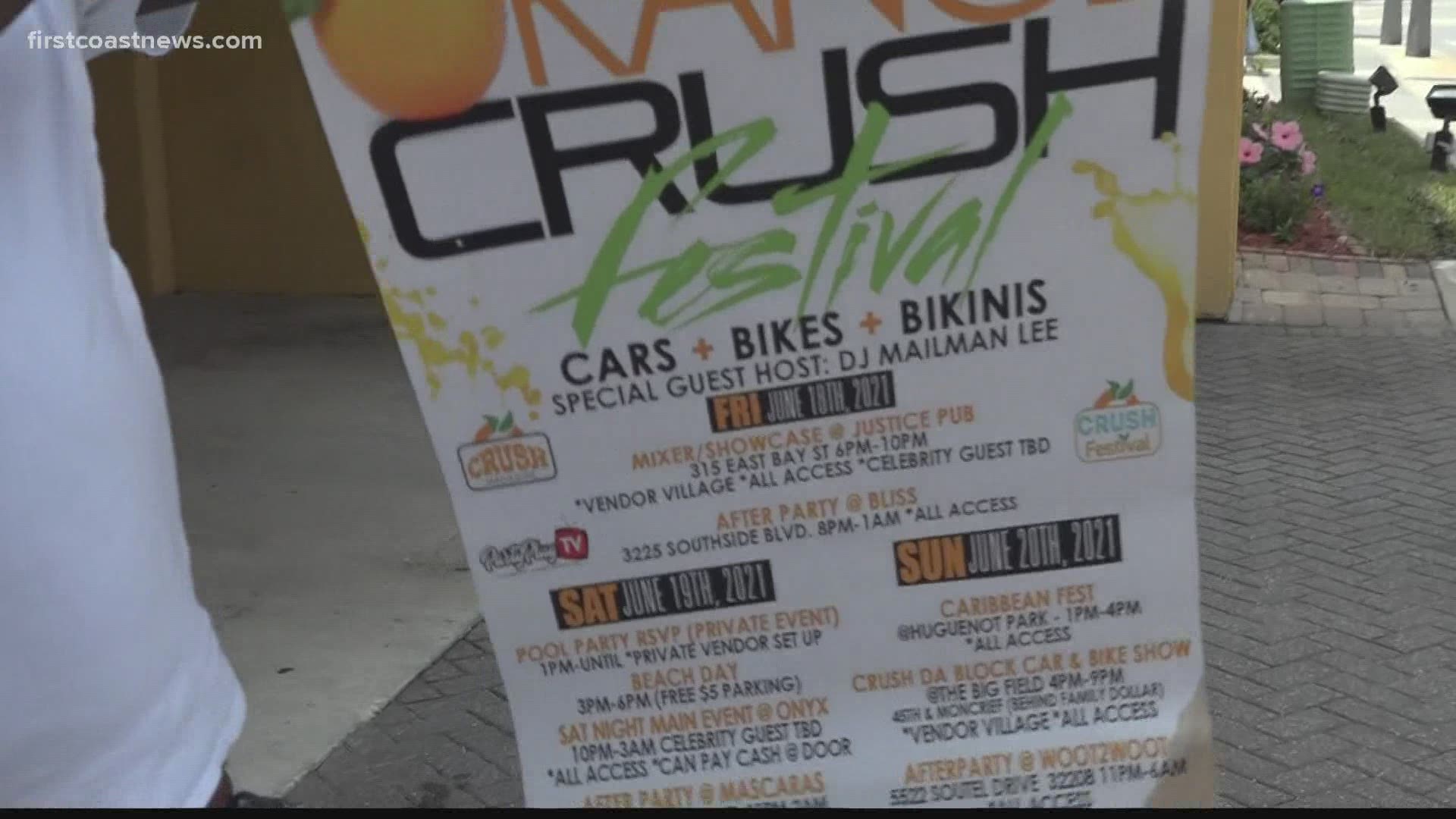 Friday is the first day of Orange Crush Festival.

The festival is expected to draw 20,000 people with party events around Jacksonville and its beaches. While some residents and business owners are jumping at the economic opportunity, others say they're closing up shop this weekend because they don't know what to expect.

First Coast News spoke with the Orange Crush organizer to clear up what to expect.

Orange Crush Festival is a series of parties around town. The festival's events won't happen all in one place. They kick off at 6 p.m. Friday at The Justice Pub on East Bay Street downtown.

RELATED: Bars, restaurants say they will be fully staffed for Orange Crush Festival

Jacksonville native Stephan Smith, also known as DJ Mailman Lee, is the festival's new organizer and describes the festival as a career opportunity for local artists.

"The first event is the artist showcase," Smith said. "I want everybody in Jacksonville, Florida. It doesn't matter if you're a rapper, singer, country artist, rock and roll artists, come show your talent. It's Orange Crush. We want people to see what our city has to offer."

Saturday is when you should expect to see the most people at the beaches, starting around 3 p.m. Expect to see charter buses.

You may have heard there's been controversy over the festival after it moved from Tybee Island where residents there claimed festival-goers did not respect the island. On the other hand festival organizers claim there were civil rights violations.

Jacksonville Sheriff's Office says they're transferring inmates to make room in the jail this weekend. First Coast News asked JSO if they've ever moved inmates for this reason ahead of an event before.

JSO responded: "This happens on occasion for a variety of reasons, including the safety and security of inmates and the institution. In this case, it was done to ensure the population is at an adequate level to account for arrests while continuing to maintain a safe level to curtail the effects of COVID-19 in the inmate population."

First Coast News asked for an example of when else this has happened and JSO did not respond.

According to Tybee Island Police records, most of the arrests made the weekend Orange Crush was there in 2019 were DUI's. There were 79 arrests total for that weekend.

On JSO making room in jail this weekend- I asked if they've ever moved inmates for this reason ahead of an event before.

Response in part: "This happens on occasion for a variety of reasons"

I asked for an example but they did not respond.

First Coast News asked Smith for his response on the JSO inmate move.

"Jacksonville Sheriff's Office is definitely going to do their job," he said.

First Coast News also asked for his response about concerns over litter.

"I was not an official for Orange Crush then," Smith said about previous years. "But I also seen the videos. I seen the trash. I seen the wiling out. Jacksonville doesn't do that. So they're expecting that, no, please pick up your trash."

Ocean Rescue workers say they'll be responding as they do for events like the Fourth of July so expect to see more orange lifeguard chairs.

The beach mayors put out a statement reminding people about the rules, including no open containers, littering nor walking on the dunes.