"Rebekah Jones exhibited a repeated course of insubordination during her time with the Department," said Helen Ferre, EOG Director of Communications. 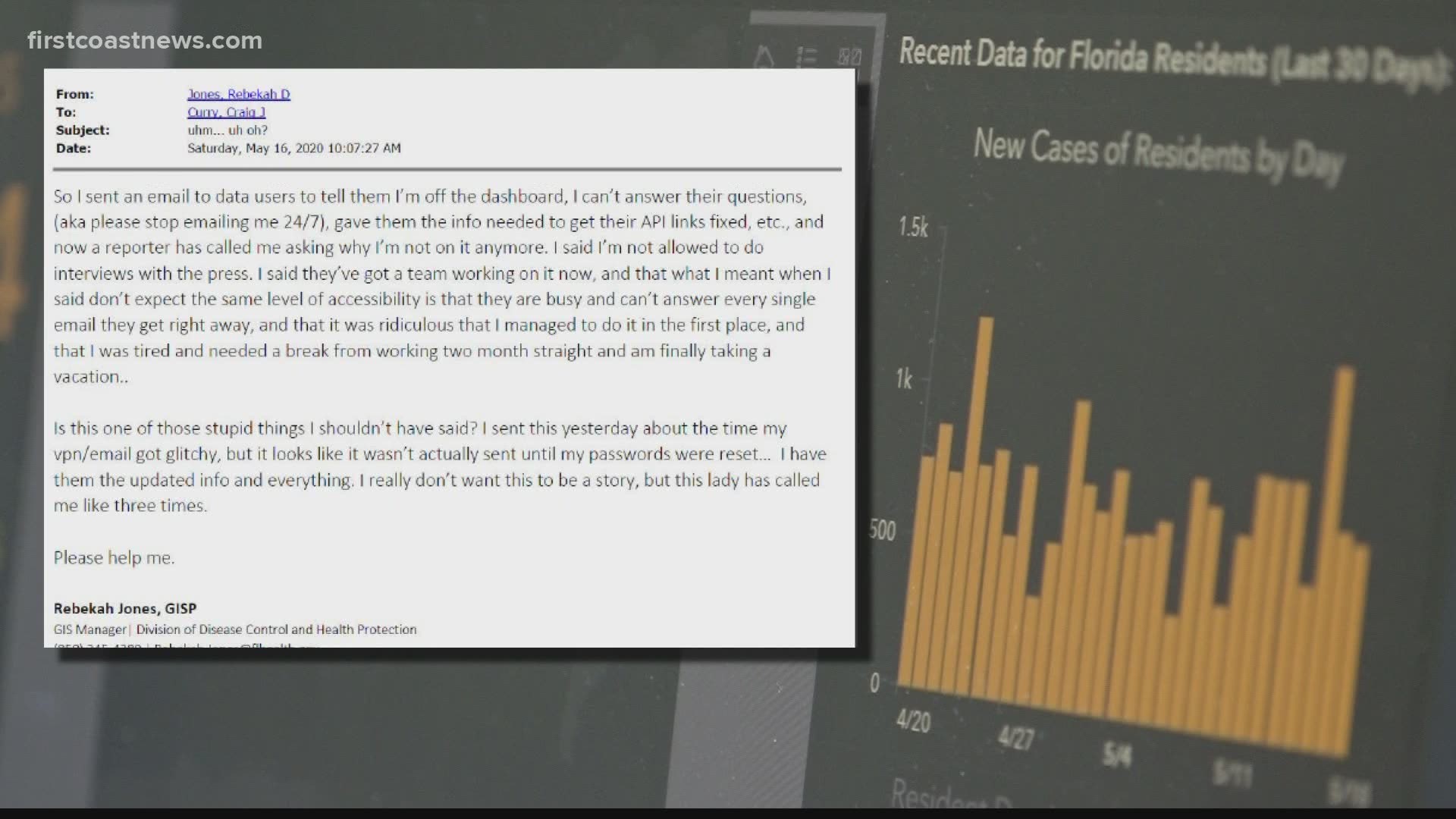 The governor's office says the former manager of Florida's COVID-19 dashboard has until Thursday to resign from her position or be fired for "a repeated course of insubordination."

Rebekah Jones led the team that built Florida's COVID-19 Dashboard, where the public gets a lot of information on coronavirus cases.

In an email obtained by First Coast News, Jones clarifies a previous statement made regarding "a level of accessibility" and a recent hiatus from her position.

“What I meant when I said don’t expect the same level of accessibility is that they are busy and can’t answer every single email they get right away, and that it was ridiculous that I managed to do it in the first place," said Jones in a May 16 email addressed to the director of IT for the Florida Department of Health. "Is this one of those stupid things I shouldn't have said? I was tired and needed a break from working two-month straight and am finally taking a vacation."

Florida Today was the first to report Monday that she was removed from her management duties entirely. In an initial email obtained by the outlet, Jones saying her situation was due to issues of transparency.

"As a word of caution, I would not expect the new team to continue the same level of accessibility and transparency that I made central to the process during the first two months," she wrote. "After all, my commitment to both is largely (arguably entirely) the reason I am no longer managing it."

Credit: Helen Ferre
First Coast News obtained an email Rebekah Jones sent on May 16th questioning what she said previously to a reporter.

Governor Ron DeSantis is dismissing reports that the state is releasing questionable statistics. Director of Communications for the Governor's office, Helen Ferre says Jones' has until Thursday to resign or be fired.

"Rebekah Jones exhibited a repeated course of insubordination during her time with the Department, including her uni-lateral decisions to modify the dashboard without input or approval from the epidemiological team, or her supervisors. The blatant disrespect for the professionals who were working around the clock was harmful to the team."

Florida Agriculture Commissioner Nikki Fried is requesting a briefing on Jones' firing.  In a letter, she asks for those responsible for her departure to answer questions at the cabinet meeting on May 28.

RELATED: Curve in Context: Here's what the percent of positive COVID-19 cases look like in Florida, Georgia as of May 19