A group of parents are teaming up online with one goal in mind: to change the dress code policy in St. Johns County schools. 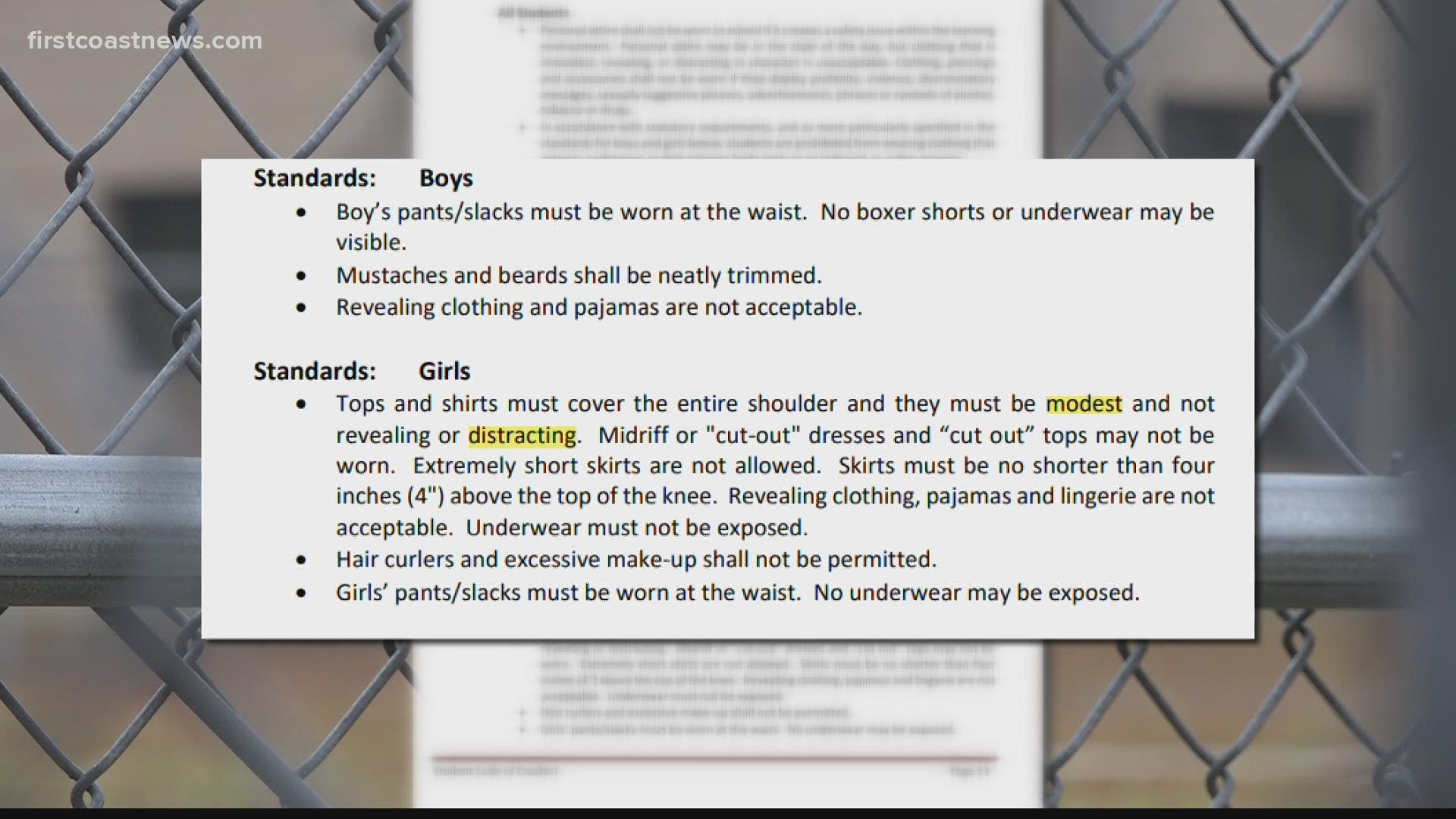 ST. JOHNS COUNTY, Fla. — A group of parents are teaming up online with one goal in mind: to change the dress code policy in St. Johns County schools. The Facebook group has grown to about 100 people since October.

“The way it’s written really only impacts one gender which is basically female," said mom Nancy Tray. She has a daughter and two sons in the school system.

"My son wore shorts to school the other day, like he’s grown four inches in the past year so he’s outgrowing stuff faster than I can buy it so he wore shorts that were way too short to school and no one said anything to him. It never even crossed his mind like oh can I wear this," Tray said.

Taryn Okeefe knows the drill. She says a teacher scolded her daughter who was wearing business attire because the teacher thought her skirt was too short.

“She got called out by the teacher,' Okeefe said. "She said you need to rethink that. It is not acceptable."

For example, mom Taryn Okeefe showed me photos of her daughter in business attire, which she wore for a school club. She says her daughter was scolded by a teacher for her skirt even though it measured according to policy.

She says this is the problem. The policy is subjective. pic.twitter.com/yN83XIaCbO

These parents make up the Change the Dress Code Facebook page. They say the wording of the dress code is subjective and harsher towards girls.

“It says tops and shoulders must cover the entire shoulder," Okeefe read. "And they must be modest and not revealing or distracting”

The majority of the dress code policy is written for all students, but at the bottom of the policy, there are two separate sections for boys and girls. The dress code section for boys does not use either 'modest' or 'distracting'.

“The premise of our schools is the teaching and learning component," said Paul Abbatinozzi. "It’s not the fashion component. We certainly respect the individuality of our students.”

He says principals of each school do have the ability to interpret the dress code and decide what is appropriate or not.

“I think it provides a guideline for the promotion of a positive school climate," Abbatinozzi said. "I don’t see it as the way written as a sexist piece.”

He says parents can change the policy, but since it is in the Code of Conduct there is a process.

Abbatinozzi says it has to go through the Student Advisory Council and the School Board during the end of the school year meetings in April through June.