Local artist shows and tells how he came to be called to design 22 Jacksonville Jaguars' shoes for NFL's annual My Cause My Cleats charity campaign. 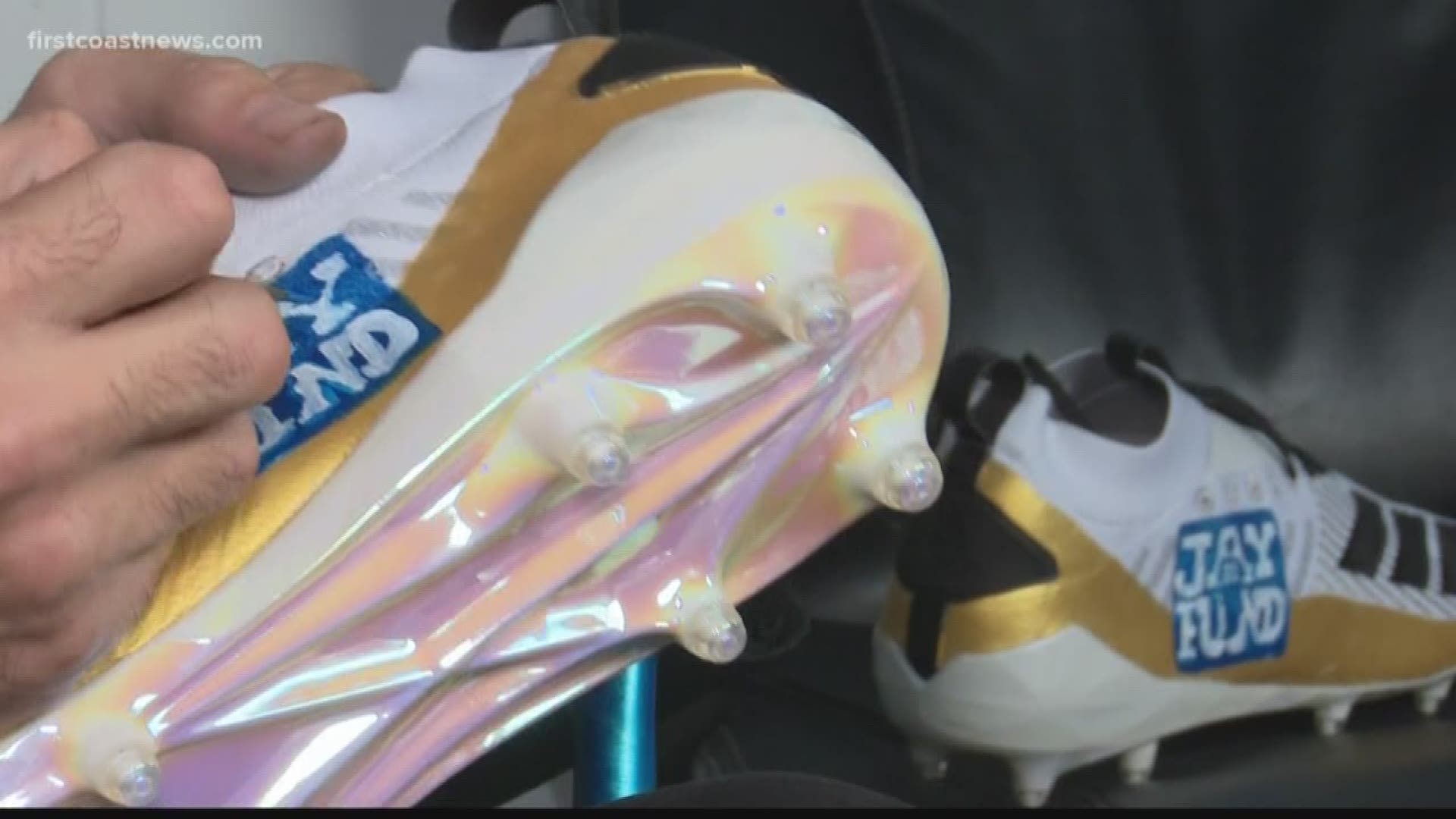 JACKSONVILLE, Fla. — As a graffiti artist, Kyle Monteiro has left his mark on, well, countless surfaces.

But when a style of art that is often looked down upon makes national TV – especially by way of the National Football League – it’s tough to knock it.

Monteiro has been commissioned to decorate 22 Jacksonville Jaguars’ footwear for the League’s fourth annual “My Cause, My Cleats” campaign, the one week of the season that players get to step up in individual style, from the ankles down, for their favorite charities.

“Honestly, it’s still kind of surreal,” Monteiro recently told First Coast News while touching up the last few pairs of cleats. “It’s crazy to think about how I even got the gig in the first place.”

‘Crazy’ as in an admirable example of self-marketing.

“I painted a big Jaguar logo on a fridge, and I posted it to Twitter,” Monteiro explained. “...And somehow some manager from the Jaguars saw it, and then the next thing you know, in my email I had a message, asking me if I paint shoes.”

He does. In fact, Monteiro will paint just about anything that doesn’t move.

And now, some things that do.

“Josh Allen, I got Keelan Cole, Donald Payne,” he said, naming some of the Jaguars whose kicks are his canvas.

Although there are many more players on the roster whose shoes are being decorated by other artists, Monteiro is the only local person tapped for the task.

He’s the primary artist responsible for adorning both the interior and exterior walls of “Toon Town,” a former warehouse within footsteps of Jags home TIAA Bank Field, that the owners hope to soon license and convert to an entertainment venue.

As Monteiro eases among various brushes and paints, he sits at the foot of an interior mural depicting several Jaguars players, Tom Coughlin, and even owner Shad Khan. Ironically, it’s one of few walls Monteiro didn’t paint at Toon Town.

“Whatever cause it may be, whether it’s Alzheimer’s or homeless, or for child care, you know,” Monteiro says describing the breadth of philanthropies players choose – and hence, he must depict.

“They give me a piece of paper that gives me the description of the organization, their meaning for why they’re doing it,” he said. “And then they give me what they want on the cleat with the logo of the society that they’re trying to represent.”

He's giving some artistic license in the process. One of the more evident ‘signature’ embellishments he includes on many players’ shoes is a ‘drip’ effect resembling wet paint, suggestive of the hurried nature in which graffiti artists sometimes are forced to abandon their work.

But even a casual glance reveals just how painstaking he is, adapting to a wide variety of shoes that at arm’s length might otherwise appear the same.

“Some of them you have to prep differently depending on the material,” he explained, indicating various materials and surface patterns.

“I would have to say those really ridged ones right there,” he said, pointing to one pair. “Those were hard to do.”

In some ways, he’s like a proud parent, but unlike most moms and dads, he doesn’t mind admitting he has favorites.

“I’d have to say those [Jaguar] print ones right here, with the gold and black and teal,” he said, favoring a particularly detailed design.

“And then Keelan [Cole’s], with all the cartoons, strictly because I love 90s.”

And though his work is meant to withstand the possibility of harsh gameday conditions, Monteiro acknowledges that it can’t be entirely indelible.

“The shoes are definitely weather-resistant, "resistant” being the keyword,” he said. “These guys are going around getting stomped on, so you can’t stomp on paint and expect for it to last forever, that’s for sure.”

Maybe not forever, but in many cases long-lived.

“After the game, all the shoes will be auctioned off for the charities,” he said, then talking about a photo he received from a Jaguars in Oregon who had been the highest bidder for a pair of cleats Monteiro painted two years ago.

“[The fan] had a big, giant memorabilia set up in his house and he had my shoes in there,” Monteiro said proudly.

In all, the prolific artist, who also occasionally repaints his entire car as both canvas and unmistakable mobile promotion, said it had taken him about three weeks to complete his assignment.

“Sometimes I don’t dive in until 11 o’clock at night, and then you’re done at four in the morning,” he said, describing how his schedule depends on when the muse hits him.

“So really, what dives me into this and keeps me going is, I just like doing the work, man, just pushing through and getting to the next thing, because I like to see the finished product,” he says.

Finished for one season’s 'My Cause My Cleats campaign', but in his third year of involvement, Monteiro has no wish to hang up his cleats.

“Everything that I’ve gotten back is nothing but good,” he said of feedback from the players. “...So I hope that’s the truth!”

Monteiro said that kind of testimony is helping his work elsewhere.

“Not only my art career but other aspects in life that, if I wasn’t legit to someone before, now I [am],” he smiled.

When asked which individual player whose cleats he wishes he was painting but is not he replied:

“Well right now I’m trying to get on the Minshew train,” he said, speaking of backup-turned-starting quarterback Gardner Minshew, who has filled in much of the season after first-stringer Nick Foles went down with an injury during the opening game.

But he’s open to creating a full-blown ‘Monteiro Mania’ if given the opportunity.

“If I did the whole team I’d jump on it just like I jumped on this, because either way it’s the Jaguars, and you have to jump.”