A Columbia County report says Gordon Scott Paul admitted to the officer that he shot and killed his neighbors' dog. The neighbors say they want justice. 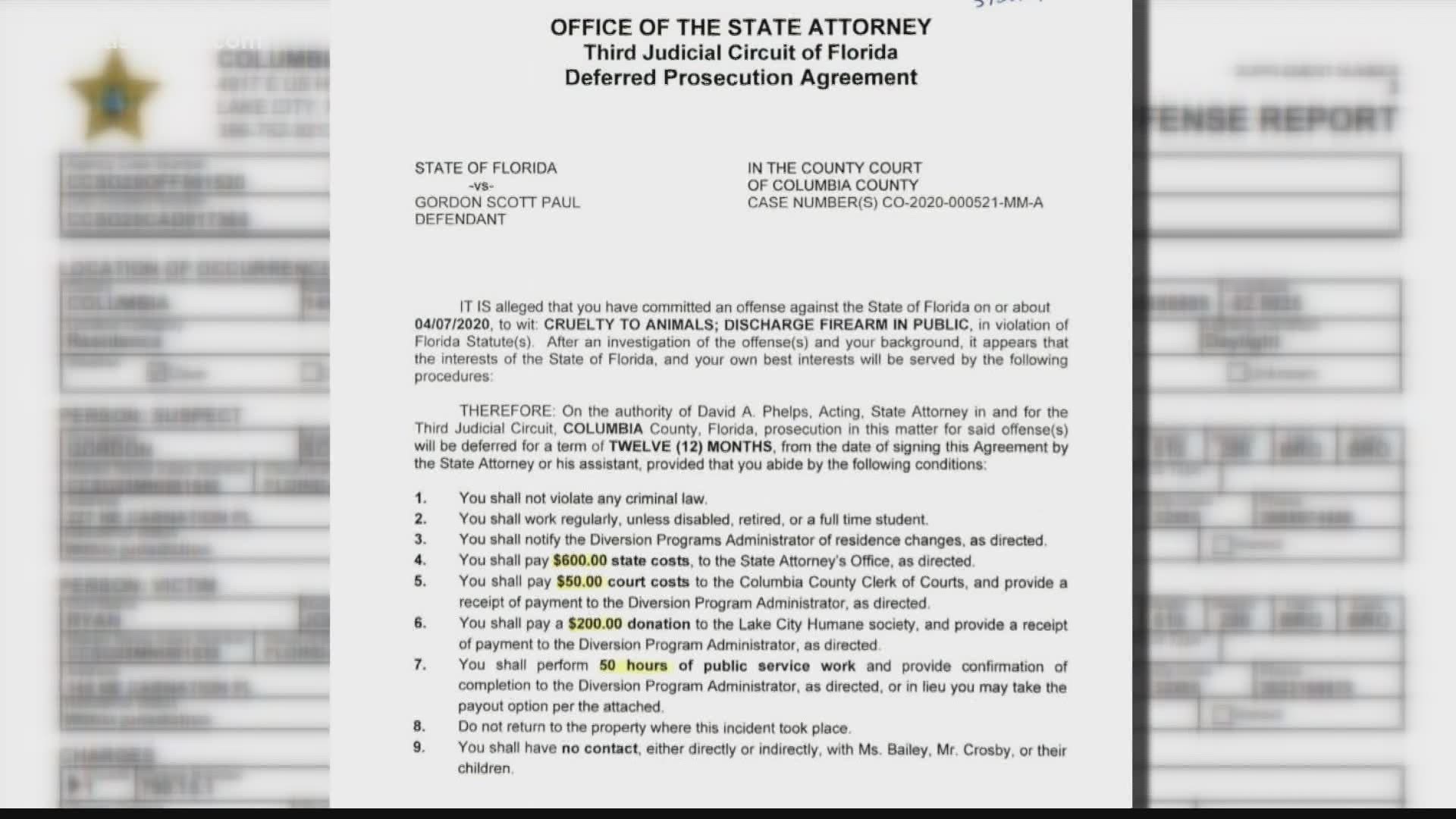 COLUMBIA COUNTY, Fla. — A Columbia County couple wants justice for their dog, Zena, after she was shot and killed in April. The man charged with animal cruelty and discharging a firearm is their neighbor.

Gordon Scott Paul received a deferred prosecution agreement, a deal given during the pretrial phase.

In the agreement, Paul is ordered to pay fines totaling $650, donate $200 to the Lake City Humane Society, do 50 hours of community service, not return to where the shooting happened, and do not have contact with Bailey, Crosby, or their children.

Mandy Bailey and Ryan Crosby, Zena's owners, say that isn't enough. They feel Florida’s misdemeanor animal cruelty law did nothing to punish the man who shot and killed their dog even when the man charged admitted to the crime.

On April 7, Crosby let his dogs out in the front yard and then went inside to grab a drink. The Columbia County police report says when Crosby walked back outside, he saw his neighbor Gordon Scott Paul, who is referred to as Scott in the report, walking towards his house.

“That’s when I realized he had a 1911 pistol in his hand," Crosby described.

The police report details a back-and-forth between the neighbors about the dog. Paul tells police that he believes Zena was killing his chickens and chasing his cat. Paul told the officer Crosby's dogs have been an issue for the last year.

“As he’s walking up in yelling his name once I see the pistol in his hand," Crosby said, "He won’t even look at me. He’s looking straight at the dog.”

Crosby says his neighbor went up to Zena and shot her in the head and the leg. According to the police report, Paul admitted to the shooting. Crosby says his two children, 5 and 12 years old, were inside the house at the time and saw the entire thing.

“I can’t do nothing for them, I can’t take that away out of their minds," Crosby said.

"There’s not a day that goes by that we don’t walk outside and see the bloodstained ground where Zena was murdered at," Mandy Bailey, Zena's owner, said.

Bailey and Crosby still want justice. They are now going after the law with the help of Florida animal activist Debbie Darino.

Under the current statute, killing an animal is a misdemeanor animal cruelty charge. The statue reads "A person who unnecessarily overloads, overdrives, torments, deprives of necessary sustenance or shelter, or unnecessarily mutilates, or kills any animal, or causes the same to be done, or carries in or upon any vehicle, or otherwise, any animal in a cruel or inhumane manner, commits animal cruelty, a misdemeanor of the first degree, punishable as provided in s. 775.082 or by a fine of not more than $5,000, or both. "

In Florida, minimum sentencing guidelines are not applied to misdemeanors. It’s the wording of the law that can change the charge to a felony. That what Darino says she is working to change.

"I think it was a complete injustice," said Darino. She's joining the couple's fight for justice from her home. She’s trying to change the wording of the Florida misdemeanor animal cruelty statute.

It’s not her first fight. She’s the woman behind Ponce’s Law, which passed in 2018 increasing the punishment for felony animal cruelty and allowing judges to ban offenders from owning another animal. Darino was already working on amending the misdemeanor statute when she heard Zena's story.

“It’s just horrible. Just horrible. Breaks my heart. It makes me push even harder to get these laws passed," Darino said.

She said she is doing the work now to be ready for the next legislative session is in 2021. You can follow the case in the Facebook group Justice for Zena. The group has more than 1,000 members.