Company representatives believe the odor may be coming from facilities near IFF, but not from IFF. Residents who spoke up at the meeting are not convinced. 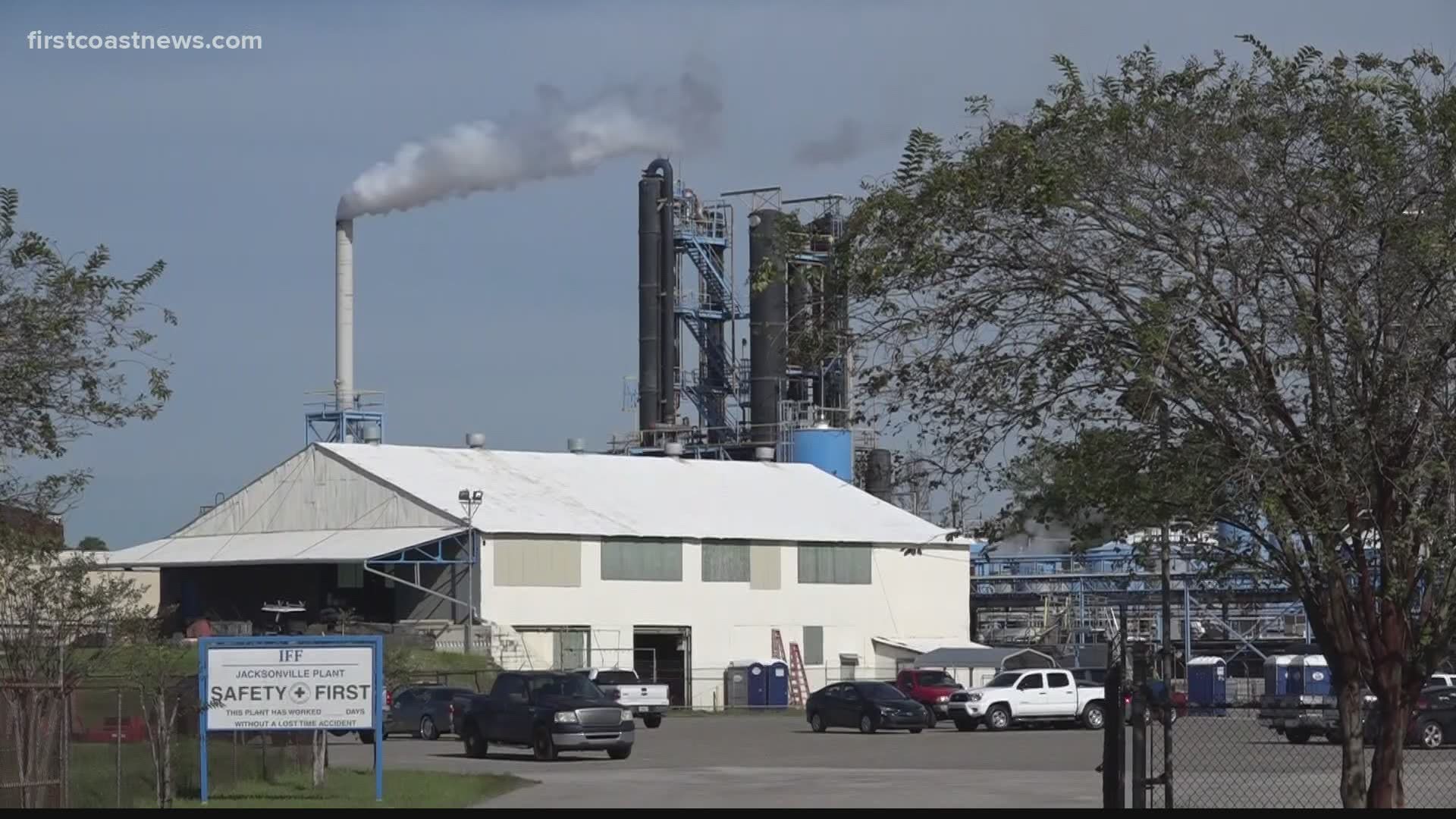 JACKSONVILLE, Fla — For the first time, residents are hearing publicly from the company at the center of an investigation into a 'nauseating' odor in part of Jacksonville.

IFF is also being sued by several Jacksonville residents who claim the odor is forcing them to stay inside their homes.

Company representatives believe the odor may be coming from facilities near IFF, but not from IFF. Residents who spoke up at the meeting are not convinced.

IFF hired environmental scientists from the company Golder Associates to do air sampling tests. Senior Environmental Scientist Gage Miller explained they did one day of air sampling for turpentine and for sulfur, finding neither compound. What they did find was the chemical compound styrene, which is used to make plastics and rubber and said to have a sweet odor.

"From my understanding, IFF does not use any styrene in any of their processes on site," said Miller.

Watson May says they are investigating at least one other company as the odor source. She says they have examples of complaints that were made when the wind was blowing the wrong direction in relation to IFF.

Watson May also pointed the finger at a Jacksonville wastewater lift station as a source of the odor. Otterson gave a presentation on how IFF is using hexagonal discs on the surface of their pond to help reduce the amount of vapor from their own water wastewater treatment.

About a dozen community members spoke at the meeting to say they are not satisfied.

"Cherry-picking random days and showing wind is not convincing to me at all," said Jacksonville resident Grant Cooper.

"I am a psychologist and I'm an expert in gaslighting and I have to say that I'm pretty offended by the presentation today," said resident Angela Mann. "One to two days of sampling and then telling the community that this might be a wastewater treatment plant just doesn't seem like a big commitment to resolving the issue."

"Attempts to pin blame on other small businesses are disgraceful and insulting to the community," said resident JA Hobson.

One point to come out of the meeting is a larger push to get city council members to vote in favor of a year-long study to pinpoint the source of the odor. If approved, West says the study could begin as early as this summer.

The Jacksonville Environmental Protection Board voted earlier in March to approve a study by so-called environmental intelligence advisor Envirosuite. There is not a date set for a city council vote.

Anyone experiencing the odor is encouraged to file a complaint with the city, report it to the DEP by calling 904-256-1700, and email the Murray Hill Preservation Association at MurrayHillChemicalSmell@murrayhilljax.com.

See the frequently asked questions page given to those who registered for the town hall below.

1.      What is DEP role in providing oversight of the IFF facility?  The department has issued a Title V Air operating permit that regulates air pollution emitting activities at the facility. The department consistently monitors the facility’s emissions through validated reports and on-site visits. Currently, the facility is considered by the department to be “In Compliance” with its Title V permit.

4.       Have the odor concerns been investigated by the department? Has the source been identified?  The department’s Northeast District’s Emergency Response and Compliance Assurance Program teams have investigated odor complaints through at least 16 separate site visits between 2012 and 2019, verifying compliance and complaint response, meetings with complainants, and the review of air monitoring reports from IFF. However, at those times, the Northeast District staff was unable to substantiate any of the odor concerns.  In 2020, FDEP received six odor complaints and referred them to COJ for investigation.

5.       Has any air compliance monitoring been conducted for the IFF facility? Do these results indicate any compliance concerns?  The Northeast District receives annual and semi-annual monitoring reports from IFF. Compliance inspections are conducted by DEP’s Northeast District staff on at least a biennial basis. Nothing in the required reporting or inspection process has indicated a compliance concern. All reported emissions are below the established standards in the IFF permit. It is important to note that air emissions standards are health-based limits designed to protect public health. Residents with health-related questions or concerns are encouraged to reach out to the Florida Department of Health or their health care professional.

6.       What actions have or will be required of IFF to alleviate the odors? Have any of these been completed?  With respect to the city’s ordinance code, the City of Jacksonville issued IFF a citation for objectionable odors. The city has met with IFF and continues to work with representatives from the company to find a solution and the implementation of any necessary corrective actions to stop or minimize objectionable odors. The city continues to investigate odor complaints and identify the source or sources of the complaints and pursue compliance accordingly.  The city may consult with department staff to assist with this process.

8.       Is this matter being investigated as an environmental issue? If so, how would this affect this case?  The department is the primary state environmental regulator for the IFF facility. As mentioned, the Northeast District’s Emergency Response, Compliance Assurance Program staff and leadership team have investigated odor complaints by conducting 16 separate site visits between 2012 and 2019, meeting with complainants, and reviewing air monitoring reports from IFF. However, at those times, the Northeast District staff was unable to substantiate any of the odor concerns. This review has also focused on determining if there are any compliance concerns with IFF’s Title V permit. None have been identified to date. The City of Jacksonville’s ordinance code address objectionable odors as a public nuisance, not as a public health or environmental issue.