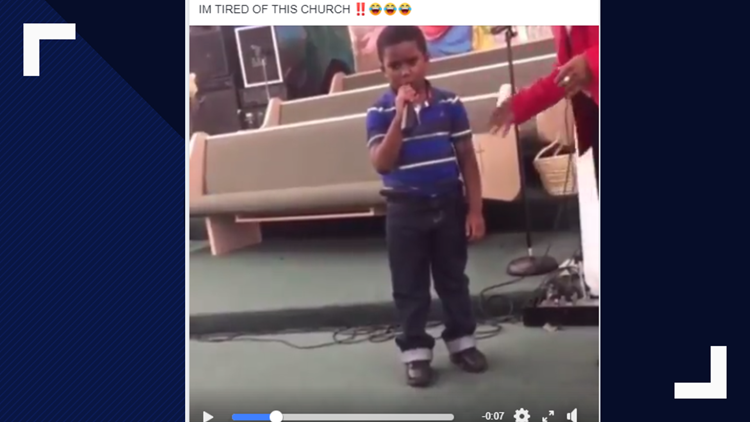 Photo by: Facebook screenshot
His grandmother wanted him to give a Christmas speech at church, but he wasn't having it.

"I'm tired of this church" | How a little boy's words shocked, amused, and liberated us

Naszir Ferrell, 6, was at church with his grandmother on Christmas in Oakland, Calif. and he was supposed to give a speech. He didn't want to, but was thrust upon the stage anyway. So there he was in front of the congregation and being handed a microphone.

The kindergartner took the mic, said, "I'm tired of this church," handed the mic back to the emcee, and walked back to his seat with his head down. The Internet got hold of the clip and it has been viewed over a million times on YouTube, Facebook and Twitter.

During an interview on Facebook Live the day after, Naszir said, "I was with my grandma at church. ... I didn’t practice it (the speech). I started getting mad and I went up on stage and I said “I’m tired of this church.” He said the pastor took him in the bathroom and told him, “don’t do that again.”

During the Facebook interview, Dominique Ferrell, the child's father, added “I fired on him.” (AKA – he got a spanking).

"My mom’s best friend wanted him to do the speech real bad," Dominique said. "I already told my mom he doesn’t know it, so don’t force him … they ended up putting him up there any way."

Dad said he didn’t know Naszir gave the “speech” until he got a direct message on his phone that said, “Bro, your son done went viral.”

Turns out Naszir struck a cord. Many of the comments on social media ranged from "he needs a whoopin'" to "I wanted to do that when I was a kid, but was too scared."