Where and when you can watch July 4th fireworks in Jacksonville, Northeast Florida

In Jacksonville, the city is planning a big 4th of July downtown fireworks show over the St. Johns River. 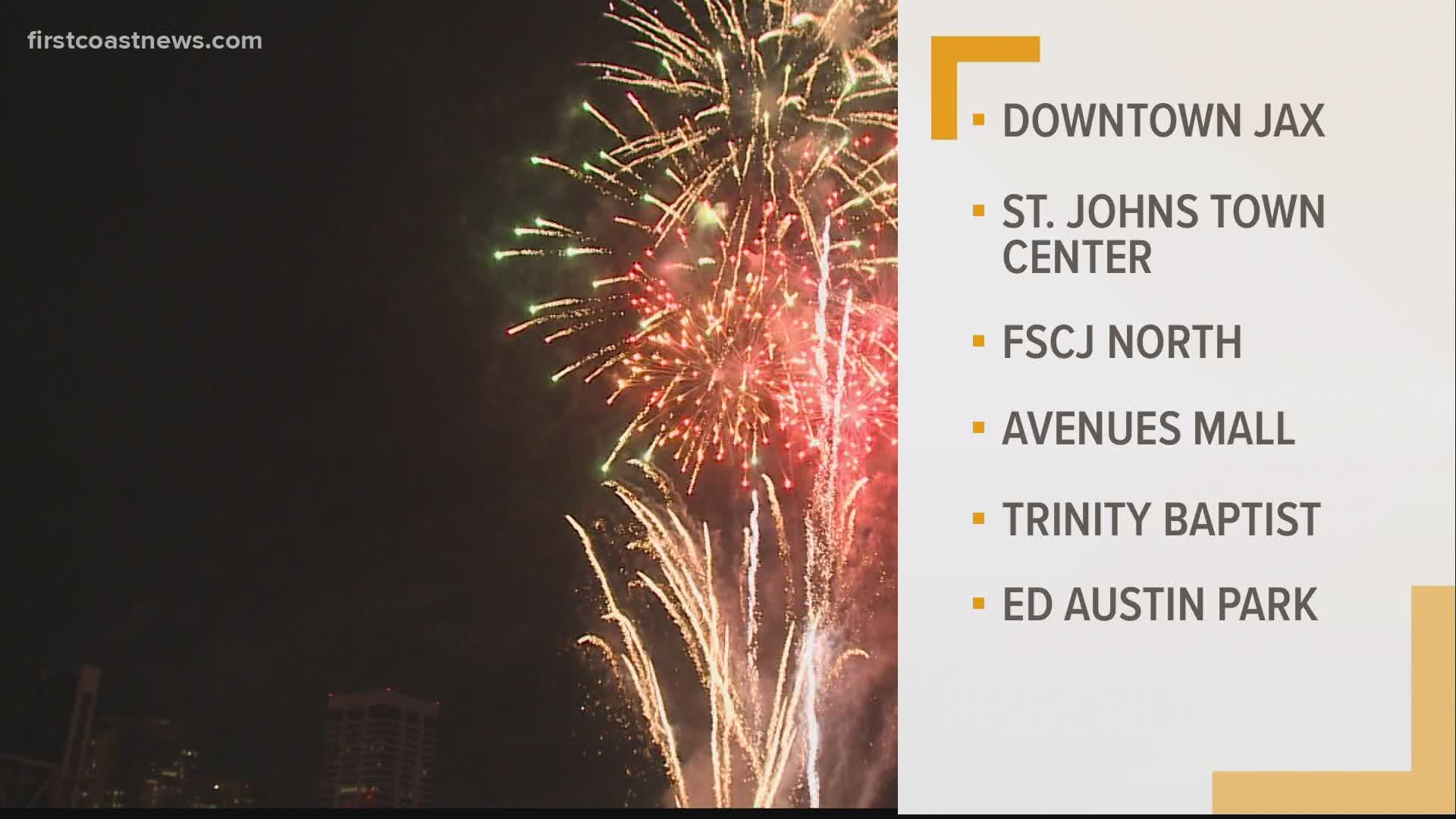 JACKSONVILLE, Fla. — After a year of forced isolation and divisive politics, America is ready for a big, booming birthday celebration.

In Jacksonville, the city is planning a big 4th of July downtown fireworks show over the St. Johns River — and simultaneous fireworks shows at five other locations around the city.

St. Augustine, Fernandina Beach, Jacksonville Beach and Keystone Heights also have fireworks shows planned for the 4th. The celebration in Orange Park was canceled for this year.

Here is what we know.

The City of Jacksonville’s traditional fireworks show — downtown, over the St. Johns River, easily visible from the Northbank or Southbank — launches at 9:45 p.m. on the 4th. A family fun zone, food trucks, inflatable ax throwing and a concert by the Bryan Malpass Band and STR8UP are planned for Riverfront Plaza, the field where the Jacksonville Landing formerly stood. Festivities start at 5 p.m.

Everywhere else in Jacksonville

The city is also planning fireworks shows at five other locations, all starting at 9:45 p.m. on the 4th. Fireworks will be launched from the St. Johns Town Center, the FSCJ North Campus, The Avenues mall, Trinity Baptist Church and Ed Austin Regional Park. Restrooms will be available at all locations.

Fireworks are planned for 9 p.m. on the 4th at the Jax Beach Pier. The pier parking lot will be closed for the festivities, so plan to park elsewhere. A Beaches Freedom Festival is planned for July 10.

The Jacksonville Jumbo Shrimp are on the road in Memphis over the holiday weekend, but they are throwing an Independence Day party regardless. They'll open the gates to 121 Financial Ballpark at 6 p.m. on Saturday, July 3, and show a baseball movie on the big screen at 7:30 p.m. Fireworks start around 9:15 p.m. $10-$99.

At the Castillo de San Marcos in St. Augustine, a two-hour concert of big band and swing music will precede the 9:30 p.m. fireworks show over Matanzas Bay. More than 5,000 fireworks shells are planned for the 20-minute show, which will be choreographed to patriotic music.

Fernandina Beach is starting its Hometown 4th of July Celebration at 6 p.m. Sunday in the downtown streets. Two days later, volunteers will walk the Amelia Island beaches, cleaning up after all of the unauthorized fireworks shows.

The Our Country Day celebration in Keystone Heights stretches over eight days, with a street dance planned for Saturday, Ju 26; a 5K run, parade and festival on Saturday, July 3; and fireworks at 9:30 p.m. on the 4th.

Russell Baptist Church on Sandridge Road is planning a Foodtrucks & Fireworks event starting at 7:30 p.m. on the 4th. Active-duty military and first responders will get a $10 voucher to use at the food trucks as thanks for their service.

The American Pie Fourth of July celebration at Moosehaven in Orange Park has been canceled for 2021. The Town of Orange Park will hold a 4th of July Parade — at 10 a.m. on the 3rd of July. The parade runs from Orange Park Junior High School down Gano Avenue to Grove Park Elementary.