Fans to descend on San Diego for the 50th Comic-Con 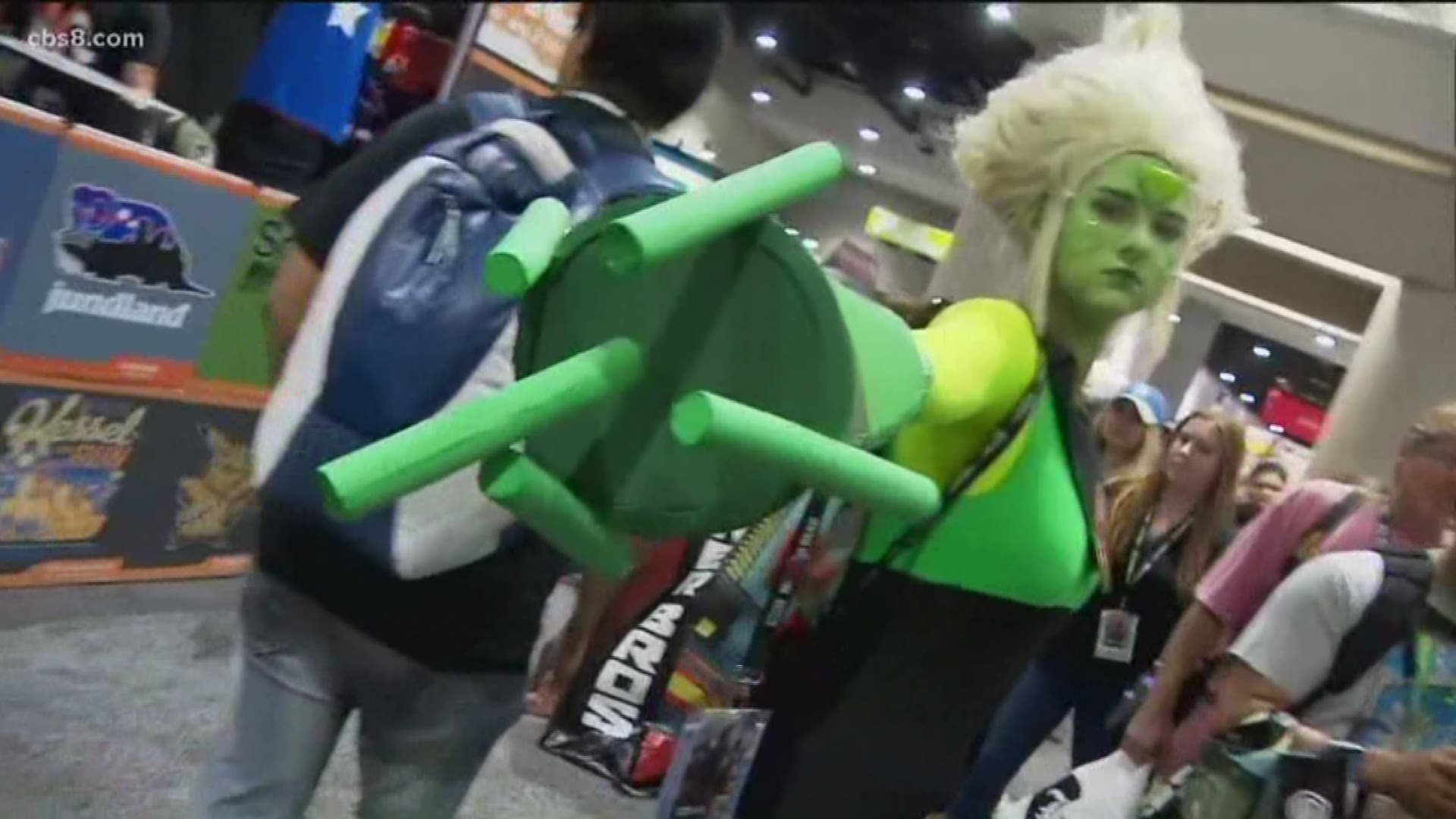 The four-and-a-half day convention kicked off Wednesday with the show room floor opening to thousands vying for exclusive merchandise, from art to toys. Later, Warner Bros. is hosting a ScareDiego event promising some hair-raising new footage from "It: Chapter Two."

"We have some exciting footage but I can't go into details," said "It" director Andy Muschietti. "But I think it's going to be worth it for the fans to go and watch."

Workers were putting the final touches on the all the branded exhibitions Wednesday evening, like the Walking Dead-themed AMC "Deadquarters" installation, while enthusiastic fans lined up outside of the convention center. A few were already in full costume, including a man in a "Stranger Things" Hawkins Police uniform and an Australian couple dressed as Marty McFly and Doc Brown, although most opted for the nerd-approved t-shirt (there were more than a few AT-AT, Jurassic Park and Laura Palmer shirts) for badge pickup.

Those in full cosplay were grateful for the cooler-than-usual temperatures.

"I would be melting," said Ana Nibbla of San Diego, who was dressed as a female Pennywise, or "Princess Pennywise" as she likes to call it.

She likes to hit the convention floor early to check out exclusives from artists who don't go to conventions often. "This is the one time a year I get to see them in person."

And although Wednesday is typically quiet, lines and big groups could be found offsite as well, including the dozens of people who'd gathered outside a Conan O'Brien taping hoping to catch the cast of "It: Chapter Two."

"This is my favorite, I'm a huge Stephen King fan," said Cheryl Dolbel from Jersey in the Channel Islands, who was wearing a t-shirt with artist drawings of both Tim Curry and Bill Skarsgård as Pennywise. "We tried to go for the taping, but we couldn't get in. We've been waiting a few hours."

She's hoping to see Skarsgård and James McAvoy and later in the week is going to visit the "Brooklyn Nine-Nine" installation.

As the week goes on, movie fans will also get a look at Paramount's "Terminator: Dark Fate" at a Hall H presentation Thursday, and on Saturday be treated to a Marvel Studios presentation with its president, Kevin Feige. Details for the Marvel show are being kept under wraps, but many expect Feige and his "special guests" will outline the plans for Phase 4 of the Marvel Cinematic Universe, which could include announcements about "Black Widow," ''Guardians of the Galaxy Vol. 3," ''Shang-Chi" and "The Eternals."

The movie fare is lighter than usual, however. A few of the studios have chosen to sit this year out, like Sony, which is already cleaning up at the box office with "Spider-Man: Far From Home," and Universal Pictures, which doesn't have any superheroes on its slate at all. Although Warner Bros. is coming with "It: Chapter Two," it does not have a big Hall H presentation planned for any of its DC properties like "Joker" and the Harley Quinn spinoff "Birds of Prey." And there will be no "Star Wars" news either.

"If anything, the exiting of some movie studios has made more room for TV and TV is just the best of the best right now," said Perri Nemiroff, a senior producer for Collider.com and host of the YouTube series Movie Talk.

Television enthusiasts will have their pick, whether they want one last go-around the cast of a show that's ended (like "Game of Thrones" and "Supernatural"), to check in with some old favorites ("The Walking Dead," ''The Good Place," ''Westworld," ''Arrow," ''Rick and Morty" and "Riverdale"), or get first look at a new property (such as "Snowpiercer," ''Star Trek: Picard" and "The Witcher").

Occasionally this means throwing a Comic-Con newbie into the mix. HBO is bringing Lin-Manuel Miranda out for his first ever convention to promote the new show "His Dark Materials."

Last month Miranda tweeted a modest request for fans: "Be gentle, it's my first Comic-Con."