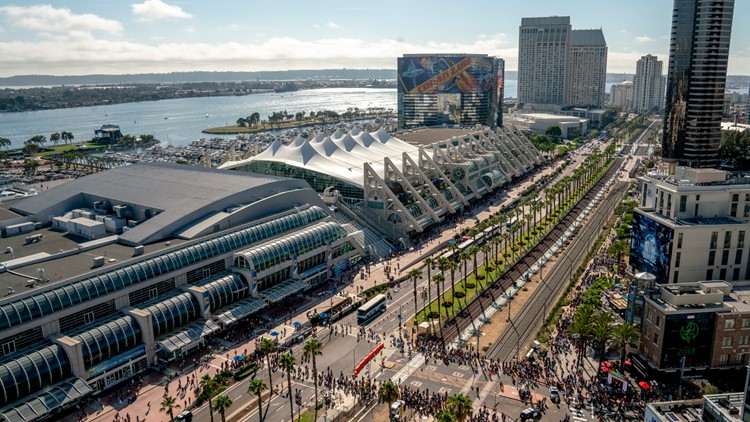 Comic-Con at 50: Bigger than ever, but at what cost?

LOS ANGELES (AP) — No one expected their culture would ever become mainstream when a few hundred comic book and science fiction enthusiasts and creators gathered in the basement of a San Diego hotel 49 years ago for what would become known as the first Comic-Con.

"A long time ago he said, 'One day Hollywood is going to come to Comic-Con to get its ideas,'" co-founder Mike Towry said. "That seemed pretty far-fetched to us, but Jack Kirby was pretty visionary."

As the 50th Comic-Comic kicks off Wednesday, with a big Marvel Studios panel on Saturday that's sure to be the hottest ticket in town, and Spider-Man and the Marvel Cinematic Universe dominating the box office, Kirby proved to be right. But it took a while for Comic-Con to really "go Hollywood."

"We were just looking to get together with our fellow comic fans and some of the people who created the comics and science fiction we enjoyed," Towry said of the early years. "Comics back then were looked down on by pretty much everyone."

Roy Thomas remembers being part of one of the first "real movie events" at Comic-Con. In the summer of 1976, the artist and two other panelists took the stage to preview an unknown sci-fi property that wouldn't hit theaters for another 10 months.

It was, of course, "Star Wars" and he was working on the promotional comics that Marvel would put out prior to release.

"We had a few posters. But we didn't even have any footage," Thomas said. "All we could do was sit there and talk about it and show a poster."

He remembers the PR guy, Charles Lippincott, trying to sell the posters later for $1 apiece.

"He didn't even sell them all," Thomas laughed. "He ended up giving some of them away."

Compare that to 28 years later, when Lucasfilm revealed the title for the final Star Wars prequel, "Revenge of the Sith." Germain Lussier, a staff writer for the websites io9 and Gizmodo, remembers it being "electric." Some 7,000 screaming people jumped out of their seats and made a mad dash to the showroom floor to get one of the T-shirts available at the Star Wars booth.

The success of the original Star Wars may have a wake-up call for Hollywood.

"It made Hollywood sit up and take notice," Towry said. And, he thinks, it began the slow evolution of the convention into what it is today.

For most, the real tipping point for Comic-Con and Hollywood came in 2008 when "Twilight" descended on the Gaslamp District. The "Twihards" took fandom to a new level when they camped out overnight to secure a spot to see the panel. That had never been done on that level.

Since then, Comic-Con has been a madhouse. Nowadays, some 135,000 people descend on the San Diego Convention Center and surrounding Gaslamp District every year. There are lines everywhere for fan needs (panels, toys, autograph sessions, events) and human ones (food, bathrooms, transportation). Tickets are hard to come by, as are hotels and parking, and everything is expensive.

There are still artists on the showroom floor and off-the-beaten path panels in the spirit of those first few years. But look around the Gaslamp District where every inch of space has been branded by a movie, TV show, tech company or corporate brand (even down to the hotel key cards and elevators), and it's clear that Comic-Con has become one big advertisement.

"You could feel it when Hollywood really started figuring out that that this was a major publicity opportunity and targeting it," said film critic Drew McWeeny, who started attending in the early 1990s. "For me that was the end of it."

For McWeeny, the intense focus on movie trailers and tidbits teased by those involved in the major panels at Comic-Con, "reflects the problem with overall culture beautifully: Our conversation about films happens 99% before they come out and 1% after they come out. The film is almost inconsequential. Our cultural conversation is about marketing."

For others, Comic-Con holds value in that filmmakers get face time with fans. "It" director Andy Muschietti is returning this year with some cast and new footage from "It: Chapter Two," which Warner Bros. and New Line will premiere at its Wednesday night ScareDiego event.

"It's huge. You're really getting in contact with the fans, even for a brief moment," Muschietti said. "The fans have the opportunity to meet the cast there that they love so much and get an autograph. I think it's great."

Lately, it's become a bit of a mixed bag with just how involved Hollywood movie studios, which can fluctuate based on what there is to promote. Marvel Studios has sat out before, and this year Warner Bros. is not bringing any of its DC properties.

"I suspect a lot of studios realized that having movies at San Diego Comic-Con costs a lot of money and I don't know if it's worth all that money in the end," said Perri Nemiroff, a senior producer for Collider.com and host of the YouTube series Movie Talk. She also noted that studios like Disney have their own brand-specific conventions like D23 and Star Wars Celebration.

"I do think to some degree it's rolling back," McWeeny said. "The best thing that can happen is Hollywood just gets bored of it and it becomes something that is really for fans again."

Plus there's just the hassle of getting and being there. And perhaps "missing out" is no longer a fear: Fans can see most of the footage online soon afterward.

"It's become so huge now, it's almost like Yogi Berra said: 'Nobody goes there anymore, it's too crowded,'" Thomas said. "That's why I stay away. I do like it, but I just feel like maybe it's better to stick with my memories."