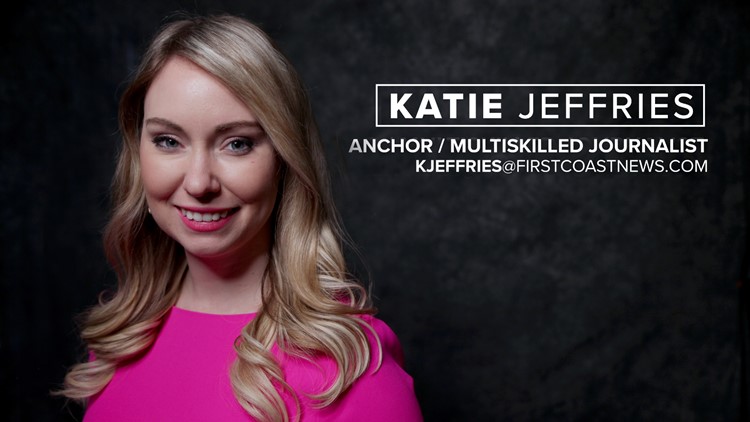 Katie Jeffries joined the First Coast News team in May 2012. She moved to Jacksonville from the Tar Heel state where she was the Greenville Bureau Chief and Weekend Morning Anchor at WCTI NewsChannel 12, the ABC/FOX affiliate in New Bern, NC for two years.
Author: First Coast News (WTLV)
Published: 11:07 AM EDT May 25, 2012
Updated: 1:01 PM EDT July 8, 2019

Katie Jeffries joined the First Coast News team in 2012 as a morning reporter on Good Morning Jacksonville. After a year she took over as the Morning Traffic Anchor and Noon News Anchor, in addition to general assignment/investigative reporting. She moved to Jacksonville from the Tar Heel state where she was the Greenville Bureau Chief and Weekend Morning Anchor at WCTI NewsChannel 12, the ABC/FOX affiliate in New Bern, NC for two years.

In her time on the First Coast she has covered Hurricanes Matthew, Irma and Hermine and multiple tropical storms. She also covered the abduction of Cherish Perrywinkle, the murder trial of Michael Dunn, Jacksonville Landing mass shooting, the murder trial of Michael Haim and the birth of the area’s first ever conjoined twins. In addition to breaking news and investigative reporting, Katie also created the series called “Unsolved” that profiles local cold cases. She also created the social media series “Driving Me Crazy” which takes a sarcastic look at driving violations and both have become a well known series around the First Coast. In 2017 she won her first Emmy for her story “Bye Garbage”.

After graduation, Katie began her journalism career as a reporter/fill-in anchor at WHIZ-TV, the NBC affiliate in Zanesville, OH where her story "An Eye in the Sky" received an Ohio AP Award.

Outside of work, Katie married her husband in 2019 and the two are parents to their two rescue dogs: Alvin & Arnold! She is a strong advocate for rescue animals and as the daughter and granddaughter of veterans – military issues are also close to her heart. She promises to work every day to give you the news that is important to your community. So if you have a story idea or just want to say hello, send her an email or follow her on Facebook, Twitter and Instagram.